Thunderstorms are likely this afternoon and evening with a few becoming severe.

ATLANTA - Tuesday is a Storm Alert Day for north Georgia including metro Atlanta. Residents will want to be weather aware with a game plan to react to two possible rounds of severe weather on Tuesday.

Severe Thunderstorm Watches are in effect for most of North Georgia until 5 p.m. on Tuesday.

Flash Flood Watches are in effect across north Georgia until 2 a.m. Wednesday.

Monday's showers and thunderstorms will wrap up early Tuesday morning, but two more rounds, with the potential for even more intense severe weather, will move in just after sunrise on Tuesday and then again in the late afternoon and early evening hours. 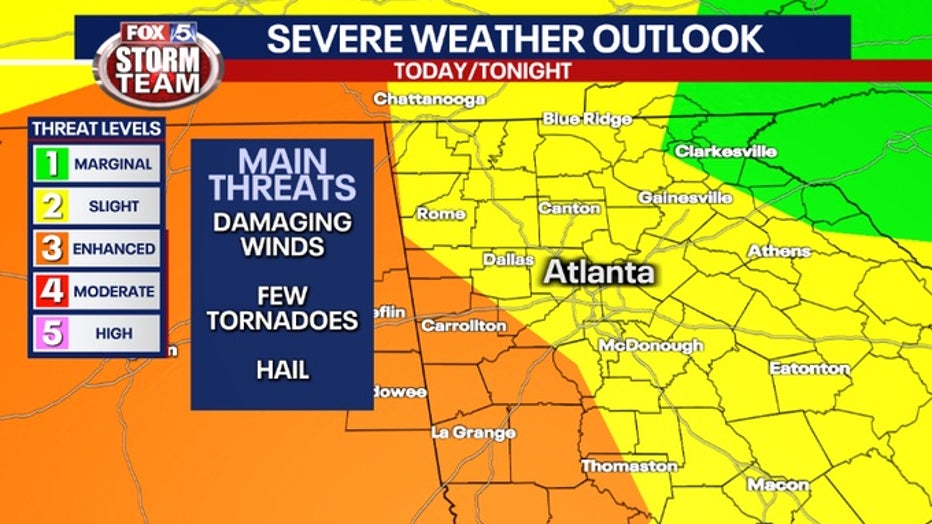 Portions of northwest Georgia will be under an Enhanced or Risk 3 Threat Level. That area is within a line from the Troup-Harris county line at the Alabama line heading northeast to the Kennesaw area and then back north-northeast to the Murphy-Whitfield county line at the Tennessee line. That area includes LaGrange, Franklin, Newnan, Douglasville, Carrollton, Buchanan, Dallas, Acworth, Kennesaw, Cedartown, Cartersville, Rome, and Calhoun. 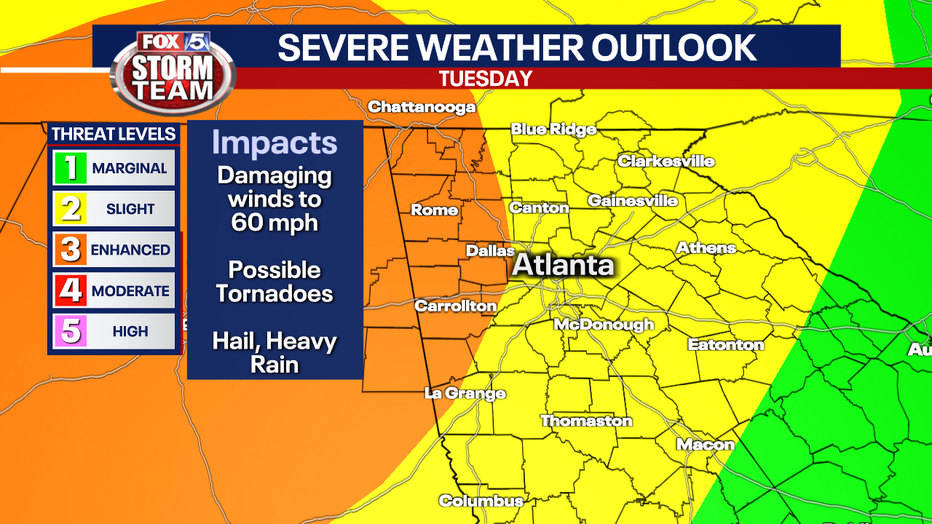 The rest of north Georgia including metro Atlanta will be under a Slight or Risk 2 Threat Level. 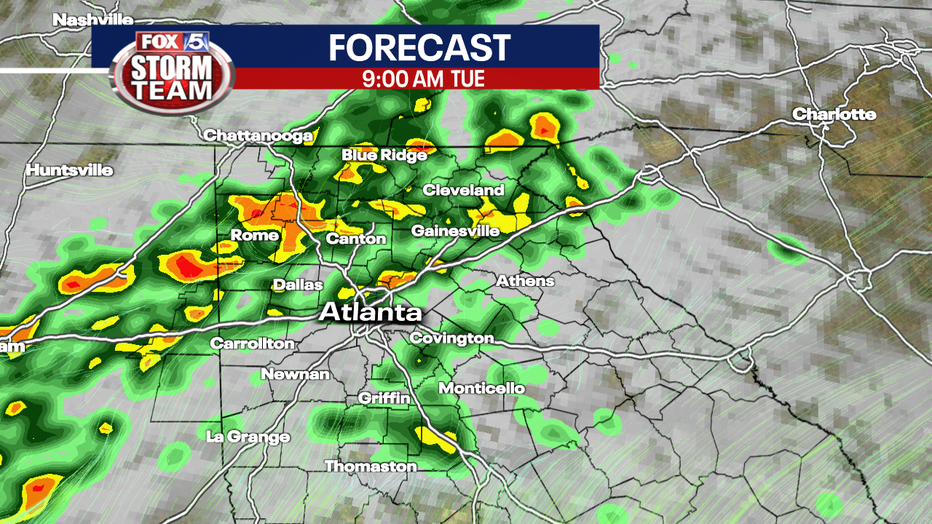 Expect two rounds of scattered thunderstorms will move through Georgia ahead of another disturbance and frontal system. 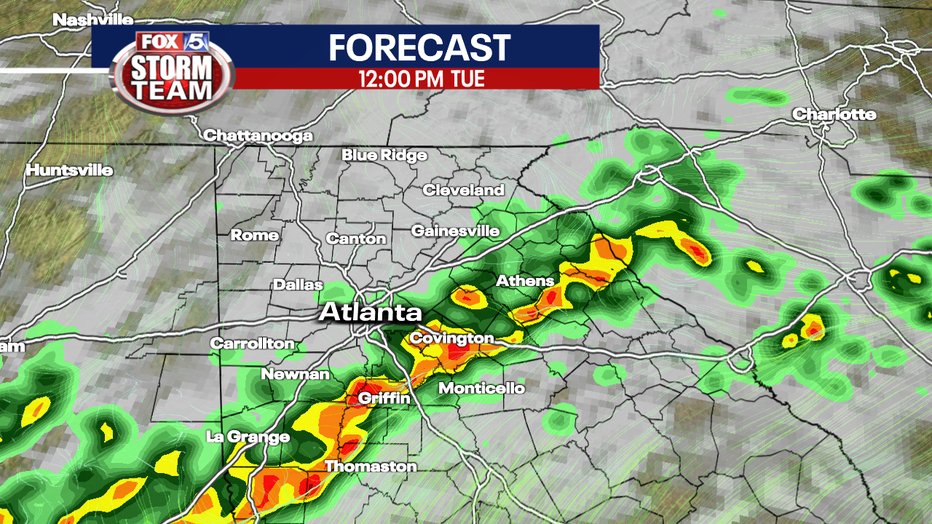 The viewing area will see some rain and rumble of thunderstorms, but some of these storms become strong or even severe. 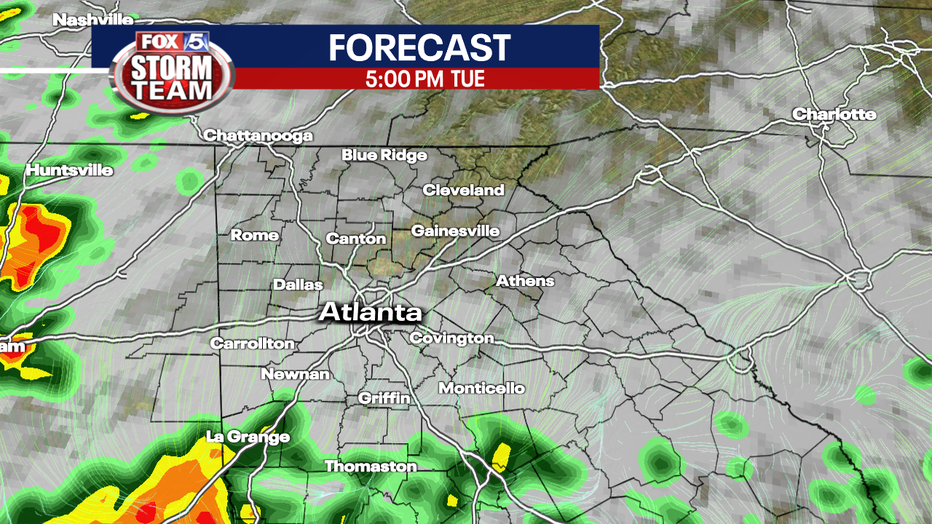 Residents can expect, in addition to a greater possibility of severe storms on Tuesday, a greater rainfall total, so expect some flooding in low-lying areas and along streams, rivers, and other waterways. 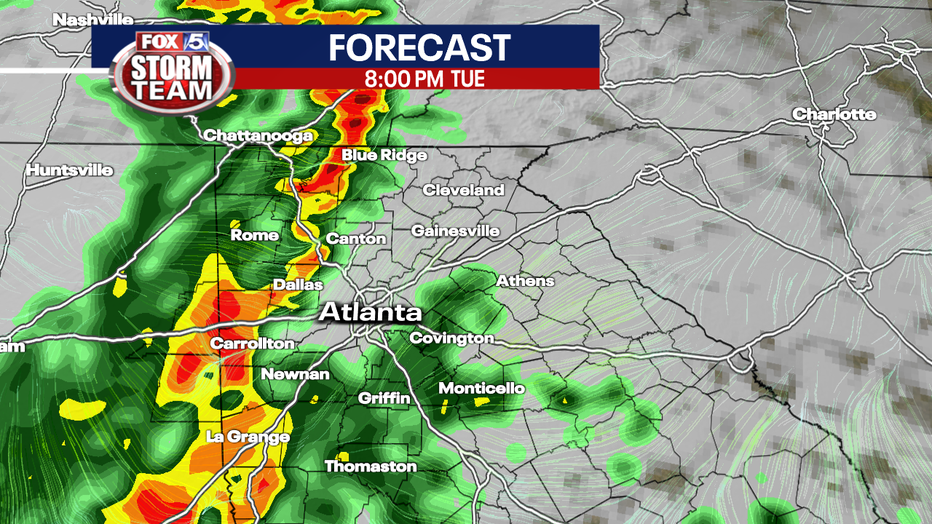 Right now, the models show the second wave has a greater possibility of turning severe, but everyone should be alert throughout the day.

The biggest threats on Tuesday will be damaging winds, isolated tornadoes, heavy rain, and frequent lightning.

Some storms could linger on Wednesday as the front pushes south, but the biggest threat will be to the south and east-central Georgia.

A chance of thunderstorms returning to north Georgia on Sunday.