ATLANTA - The state lawmaker arrested after she knocked on Governor Brian Kemp’s door is speaking out.

State troopers sent Representative Park Cannon to jail after they say she repeatedly knocked on the door as the Governor signed the elections bill into law.

During a radio interview with WAOK'S Rashad Richey Morning Show, the lawmaker said it was unlawful and that behavior needs to be addressed.

Cannon said she will not stand by while voting rights are threatened across this state.

"I was unlawfully arrested because I was knocking on the governor's door to be in attendance as he signed Senate Bill 202 which we know to be a racially-motivated voter suppression bill," Cannon explained Friday.

Cannon was booked into the Fulton County Jail on felony obstruction of law enforcement and disrupting general assembly session charges. 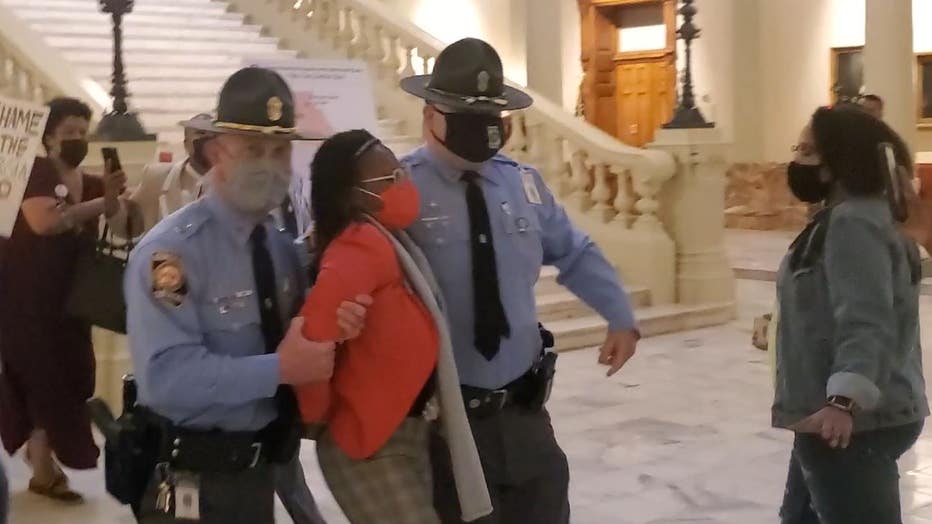 It was chaotic inside the Capitol as troopers removed Cannon from the Capitol in handcuffs.

"I wanted to be there because as a legislator I have a right just as the other legislators who were present did," she told the WAOK.

Rep. Cannon was outside the governor's office with a small group of protestors who opposed the controversial elections reform bill.

The GSP said they told Cannon to stop knocking more than once and warned her that she would be arrested if she continued.

"He should not be afforded the privilege of privacy when he is in the commission of such a heinous act intended to divest the black citizens of this state of their right to vote," Cannon explained.

The GSP said Rep. Cannon stomped on an officer's foot and that's part of the reason she was charged with obstruction.

Gov. Kemp's news conference came to an abrupt end during the commotion.

"I'm gravely concerned by the arrest because the Georgia Constitution provides that elected officials shall be free from arrest while the session is in term so we believe the constitution Protects her. We don't believe her actions were felonious."

The governor spoke on the issue during an event in Waycross, Georgia Friday.

"As far as Representative Cannon – you’d have to question, or ask the Georgia Department of Public Safety about what happened there … it’s unfortunate that a sitting state representative would actually stomp and kick a Georgia State Patrol officer," Gov. Kemp said.

This incident was not Cannon's first run-in at the Capitol. In February, she clashed with troopers during a protest over the voting bill.

No word on when she'll appear in court on those charges.