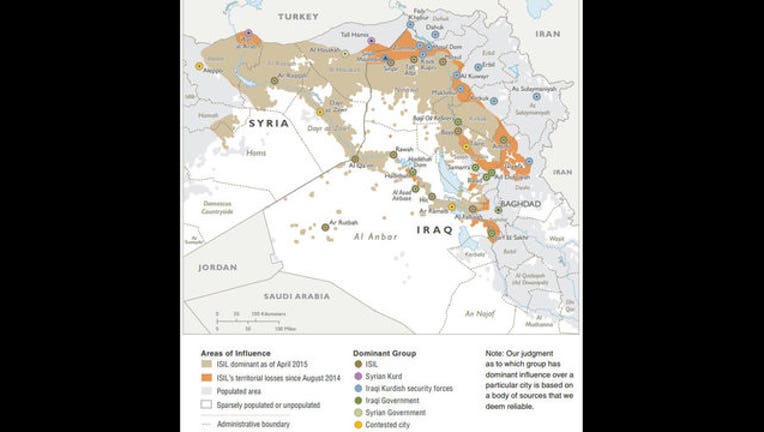 Iraq and Syria: ISIL’s Reduced Operating Areas as of April 2015 (Dept. of Defense)

Early today in Iraq, at the request of the Kurdistan Regional Government, U.S. Special Operations Forces supported an Iraqi Peshmerga operation to rescue hostages at an ISIL prison near Hawijah, Iraq.

This operation was deliberately planned and launched after receiving information that the hostages faced imminent mass execution. It was authorized consistent with our counter-ISIL effort to train, advise, and assist Iraqi forces.

The U.S. provided helicopter lift and accompanied Iraqi Peshmerga forces to the compound. Approximately 70 hostages were rescued including more than 20 members of the Iraqi Security Forces. Five ISIL terrorists were detained by the Iraqis and a number of ISIL terrorists were killed as well. In addition, the U.S. recovered important intelligence about ISIL.

One U.S. service member was wounded during the rescue mission acting in support of Iraqi Peshmerga forces after they came under fire by ISIL. He
subsequently died after receiving medical care. In addition, four Peshmerga soldiers were wounded.

On behalf of the men and women of the Department of Defense, we offer our sincere condolences to the family of the U.S. service member who was killed in this operation.  The U.S. and our coalition will continue to work with our Iraqi partners to degrade and defeat ISIL, and return Iraq to the full control of its people.