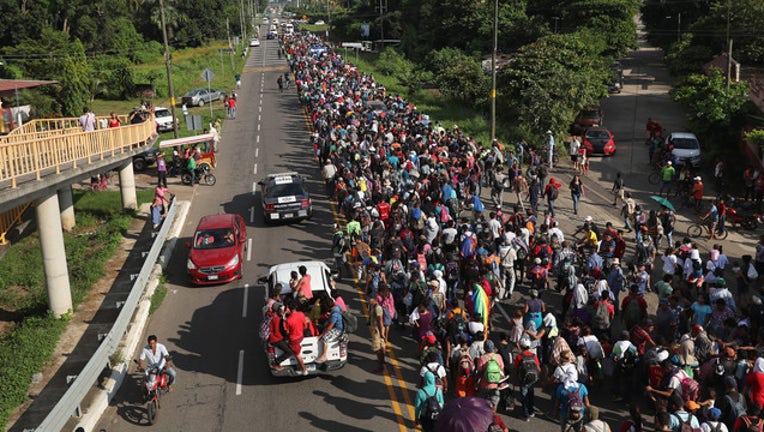 CIUDAD HIDALGO, MEXICO - OCTOBER 21: A migrant caravan walks into the interior of Mexico from the Guatemalan border on October 21, 2018 near Ciudad Hidalgo, Mexico. (Photo by John Moore/Getty Images)

(FOX NEWS) - A second migrant caravan is forming at the Honduran border and is expected to follow the larger caravan of more than 7,000 from Central America towards the U.S.-Mexico border, The Wall Street Journal reported on Tuesday.

The remaining migrants in the first group are about 1,100 miles from the border town of Reynosa, which is across from McAllen, Texas, the paper reported.

Guatemalan authorities on Sunday estimated the new group -- which gathered in a Guatemalan city near the border of Honduras -- to be at 1,000. But the group appears to be growing. The Journal, citing estimates from church-run charities and activists, reported that the group is now made up of about 2,500. By Monday evening the group had entered the eastern Guatemalan town of Chiquimula.

The new caravan reportedly plans to follow in the footsteps of the larger group, who passed through the southern Mexico border over the weekend. The group is believed to have begun its journey in San Pedro Sula, where the first caravan began with less than 200 participants.