Some rural Georgia university students are concerned about grading since they have spotty Wi-Fi connections. What they are proposing Georgia's colleges and universities do to help.

ATHENS, Ga. - Universities are finishing out the school year with digital learning, but for college students living in rural parts of the state, the lack of reliable internet has put a strain on their workload.

This has sparked a renewed call for the Board of Regents to move schools to a pass/fail grading system.

Bryson Henriott, Briana Hayes and Peyton Lee are three rural Georgia college students. They each have resorted to parking at fast-food restaurants to complete their remote class assignments. The Wi-Fi connections at their homes just aren’t reliable.

“On the days where their Wi-Fi wasn’t working, I had to go to Chick-fil-A to sit in the parking lot and try to use their Wi-Fi,” said Henriott, a University of Georgia freshman from Vidalia.

Many colleges across the country have moved to a pass/fail grading system. Emory University Law School and Morehouse College are two private institutions that have made the switch.

The University System of Georgia oversees 26 public colleges and universities in Georgia. The Board of Regents announced a month ago that it would maintain its grade letter system.

A spokesperson for the Board of Regents told FOX 5 they are not reconsidering a change, and they stand by their decision.

“What our group is working on is making sure that the BOR shows compassion to these students because that’s what they deserve,” said Hayes, a UGA junior from Baxley. 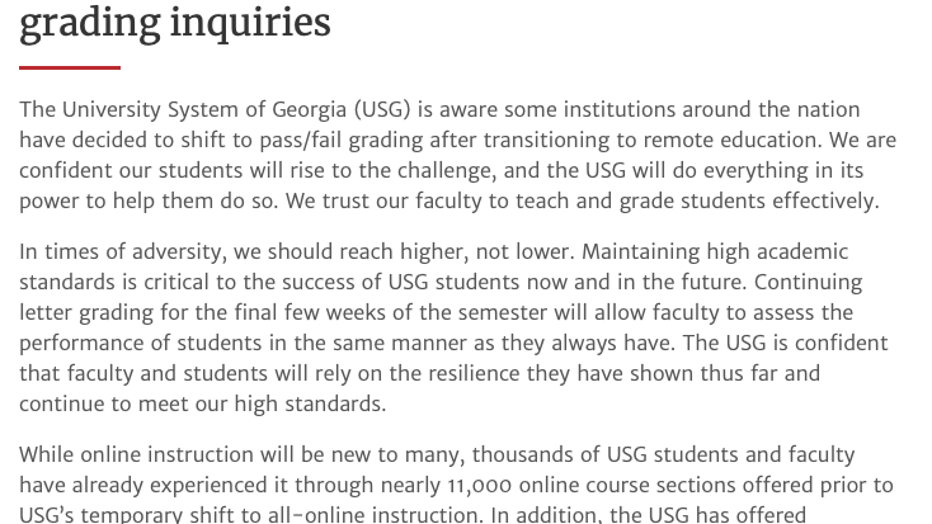 USG colleges have offered laptops, food, grants and Wi-Fi hotspots to its students.

But these students say they at least want the option.

Lee, a UGA junior from Zebulon, said, “Really it’s about letting students make choices and giving students the flexibility … in their education.”

Fighting for a pass-fail grading option in Georgia’s colleges

University and college students are fighting for the options to be graded on a pass-fail grading instead of a letter grading system due to the inequality of internet access among the students who are now having to take classes remotely.