ATLANTA - As law enforcement continue their investigation into an officer-involved shooting at Lenox-Square Mall, a Kentucky-based rapper is shedding more light into the incident that sent shoppers into a scramble Saturday night.

The man shot by police on Saturday after refusing to drop his gun may have been trying to stop a robbery.

Atlanta police say a citizen flagged down an officer patrolling the area around 8:15 p.m., alerting the sergeant to an armed robbery in progress in the parking garage on the north side of Lenox Square Mall near Macy's.

"The sergeant went to the scene of the parking garage where he witnessed two individuals robbing another individual at gunpoint," Atlanta Police Department Deputy Chief Jeff Glazier told FOX 5.

When the suspect refused the officer's order to drop the gun, the officer fired multiple shots, Glazier said. One of the suspects was later identified as Christian Edlin, a 21-year-old from Louisville, Kentucky.

According to police, Edlin and another person had guns pointed at Antonio Williams, 23, of Flint, Michigan, in the parking garage.

During the incident the sergeant shot Edlin. He was taken to the hospital for treatment in serious but stable condition. A separate suspect was taken into custody.

Atlanta Police confirmed the officer was not injured during the incident.

Rapper 2KBABY from Louisville, Kentucky, says that he was with Edlin at the time, and Edlin was trying to stop a man who had robbed them.

Edlin, a 21-year-old from Louisville, Kentucky, was charged with aggravated assault and carrying a pistol without a license. Williams was charged with robbery by snatching and giving a false name.

The sound of the gunshots sent shoppers scrambling for cover, some even trampling others in sheer panic. 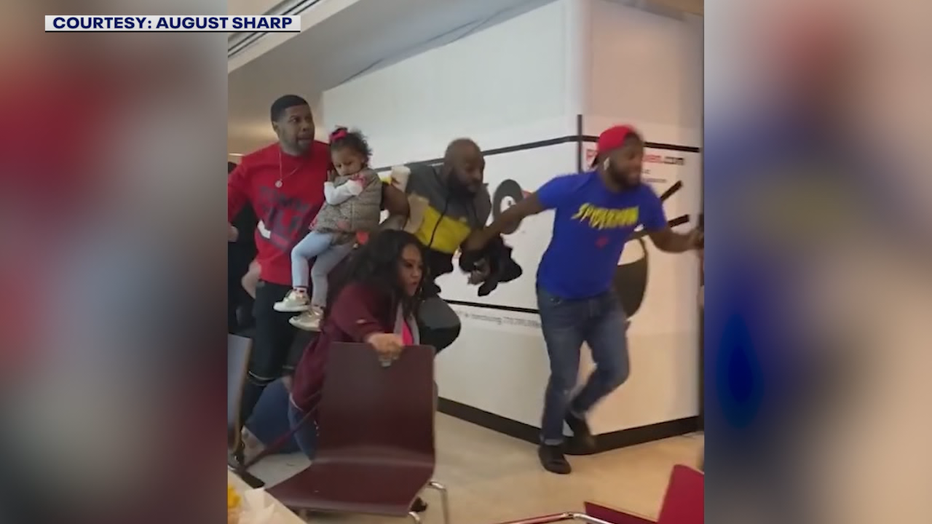 The shooting sent shoppers in the mall into a panic.

The shooting and alleged robbery fall on the heels of another shooting near the same location where a Macy's employee was shot during a robbery ahead of the holidays.

But Atlanta police insist it's not the location of the robbery. they are worried about, however.

"The location is incidental," Glazier said. "The questions you want to ask are why did the suspect commit a robbery, who is the suspect, what is his history, is it a failure of the criminal justice system, and should he even be out on the street?"

“We are committed to providing a safe and secure shopping environment for our shoppers, tenants and employees. We have a highly skilled and experienced security team that utilizes a number of proactive security measures, both seen and unseen. We also maintain a close working relationship with local law enforcement authorities to ensure that the appropriate security measures are being taken to help provide and maintain a safe environment at our property. As this is a police matter, all further inquiries should be directed to the Atlanta Police Department.”