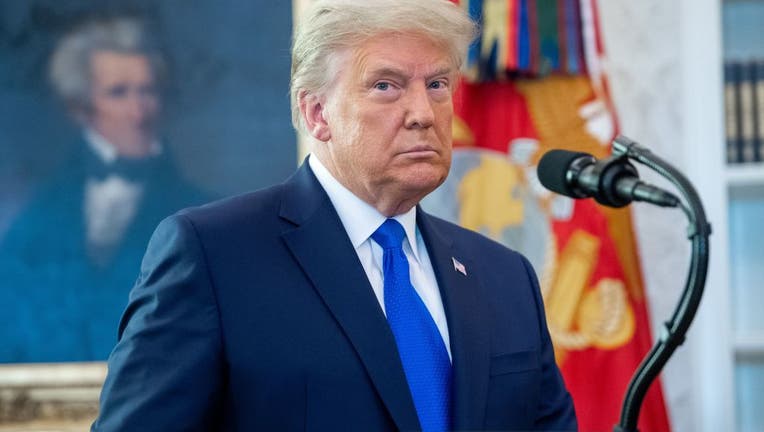 US President Donald Trump looks on during a ceremony presenting the Presidential Medal of Freedom to wrestler Dan Gable in the Oval Office of the White House.

ATLANTA - President Donald Trump is letting his frustration over Gov. Brian Kemp's handling of the state's 2020 presidential election be known on Twitter.

Writing shortly after midnight Monday, the president called his fellow Republican a "fool" and a "clown."

"Could have been so easy, but now we have to do it the hard way," Trump said, telling his supporters to demand a special session of the Georgia Legislature.

Trump has previously shown his anger over losing the southern state, which hadn’t voted for a Democrat for president in nearly 30 years. In January, the state will decide whether the GOP retains control of the U.S. Senate when voters decide two run-off Senate races.

Speaking to FOX News in late November, Trump said that he was "ashamed" for endorsing Kemp to be governor of Georgia in 2018, saying that the governor has "done absolutely nothing” to question the state’s results.

A day after that interview, Trump called Georgia's governor "hapless" and asked why he didn't "use his emergency powers, which can be easily done, to overrule his obstinate Secretary of State."

A spokesperson for Kemp responded by saying that Georgia's laws prohibit him "from interfering in elections."

Trump reportedly continued to press Kemp to call a special legislative session hours before the president appeared at a rally for Republican Sens. Kelly Loeffler and David Perdue.

“Any attempt by the legislature to retroactively change that process for the Nov. 3rd election would be unconstitutional and immediately enjoined by the courts, resulting in a long legal dispute and no short-term resolution,” Kemp and Lt. Gov. Geoff Duncan said in a joint statement last Monday.

Republicans need one more seat for a Senate majority. Democrats need a Georgia sweep to force a 50-50 Senate and position Vice President-elect Kamala Harris as the tiebreaking majority vote.