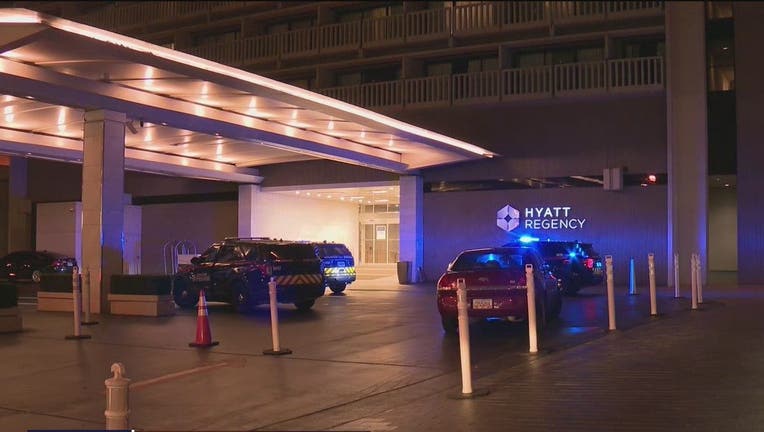 Police investigate the deadly shooting of a teenage girl at the Hyatt Regency in downtown Atlanta on Dec. 26, 2020. (FOX 5)

ATLANTA - Atlanta police have identified the teenager who was shot and killed in a prominent downtown hotel the day after Christmas.

Earlier Saturday, announced the arrest of a suspect in connection to the shooting.

Atlanta police said officers were called out to the Hyatt Regency located at 265 Peachtree Street NE in the downtown hotel district around 12:27 a.m. Saturday morning after reports of a person shot.

Police said officers arrived at the lobby to find a teenage girl, later identified as 16-year-old Kalecia Williams, suffering from an apparent gunshot wound to the groin area.

Williams was not alert, not conscious, or breathing. She was rushed to an area hospital where she later died.

Investigators said the shooting stems from an argument with a juvenile male while they were in one of the rooms.

The juvenile male was taken into custody for questioning and was later charged with felony murder, aggravated assault, reckless conduct, and possession of a pistol by persons under 18 years of age.

He was booked into the Metro Youth Detention Center.