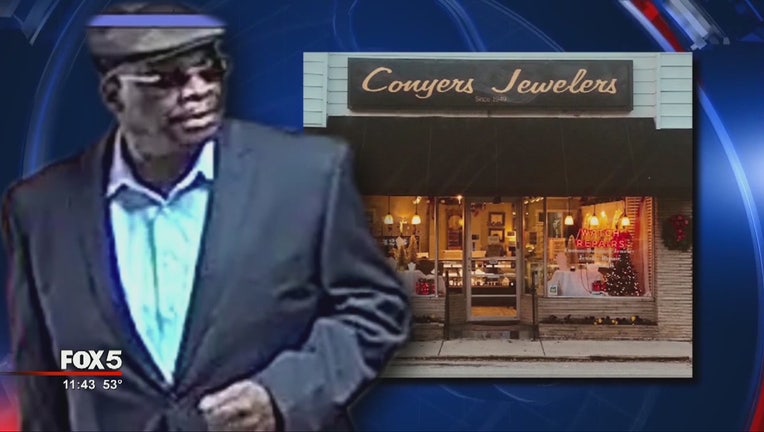 LOGANVILLE, Ga. - He’s a smooth operator who convinces and woos mostly mom and pop businesses to sell him expensive goods. But his checks and ID have turned out to be as fake as his smile.

Loganville police are searching for a man described by the owners a Loganville antiques store as a smooth-talking well-dressed crook.

Along with the smile came payment with a fraudulent check of $5,500 for a gold diamond-encrusted bracelet, gold necklace, gold nugget watch, a punch bowl set and vase.

Jameson said he presented ID with his picture and paid with a construction company check. He then asked for the vase and punch bowl to be left by the exit while he went to get his car.

“Then it hit me wait a minute nobody came to the other door to pick up the items, that’s when we called 911,” said Jameson.

In the same building, auctioneer Braxton Roberts had shown the man expensive gold coins but did not accept his check.

Roberts believes the man with the smart looks is the same person who committed a snatch and grab at his auction house of gold and silver coins about six years ago.

“Exact same man and so I didn’t catch him this time in my brain but I’ll catch him next time,” said Roberts.

Others are trying to catch him too. A BOLO was released for seemingly the same Casanova crook who investigator said used a fake ID and check-in July to steal thousands of dollars of jewelry from Conyers Jewelers.

Not far away, Jack Carter, the owner of Turn & Burn Motors in Conyers, told FOX 5 News the man took a one-way test drive in a Chevy Tahoe after driving up in an expensive vehicle.

“He just never came back. And the nice vehicle he came up in had been stolen from Hartsfield[-Jackson Atlanta International] Airport,” said Carter.

Now many are trying to track down the cunning conman before he hurts someone else. “Your time will come, I don’t know when I don’t know where but the good Lord takes care of us, he’ll take care of you too,” said Jameson.

Anybody with any information on the dapper thief is asked to contact the Loganville Police Department or Crime Stoppers at 404-577-TIPS.

There is a reward connected to the Conyers theft at the jewelry store. Tipsters may be in for a $2,000 reward and can remain anonymous.