SUWANEE, Ga. - Suwanee police are searching for two men wanted for a deadly hit and run.

Police said Christian Gutierrez was at the store with his wife and children, shopping for the holidays, when the suspects reportedly ran him over in the Walmart parking lot on Lawrenceville Suwanee Road.  According to investigators, it happened after the suspects were confronted by loss prevention officers for shoplifting. Suwanee Police Lt. Robert Thompson told FOX 5's Deidra Dukes, "The Walmart employees saw them, told them to stop and that's when they took off running."

Police said the men jumped into a U-Haul and took off, striking the Sugar Hill man as they fled the parking lot, dragging him onto Satellite Boulevard.

"They drug Mr. Gutierrez about a hundred yards through the parking lot before he was able to get out from underneath the vehicle," Thompson said. 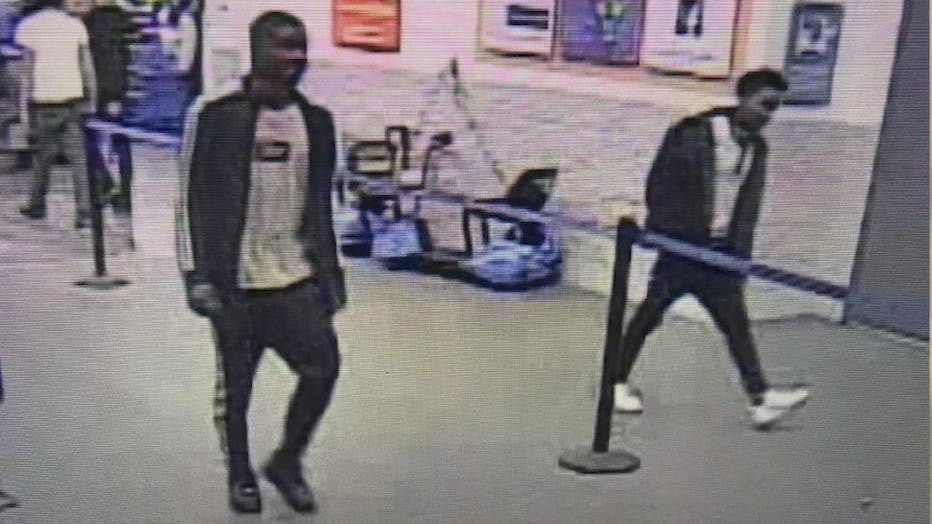 Police say the photos show two suspects wanted in connect to a deadly hit and run at the Suwanee Walmart. (Suwanee Police Department)

The 42-year-old victim died at the scene. Witnesses told police the suspects fled in a U-Haul box van with an Arizona tag number AJ-38-466.

"We have had a lot of information, phone calls coming in from the public on this case and we are looking for as much as we can get. We are following up on every lead that we can," said Lt. Thompson.

Police describe the suspects as being in their early to mid-20s. One of the men wore a dark-colored jacket with what appeared to be a white stripe down the side of it. Police said they received numerous tips over the weekend. Police are asking anyone who knows the identity of the suspects to call the Suwanee Police Department or Crime Stoppers.