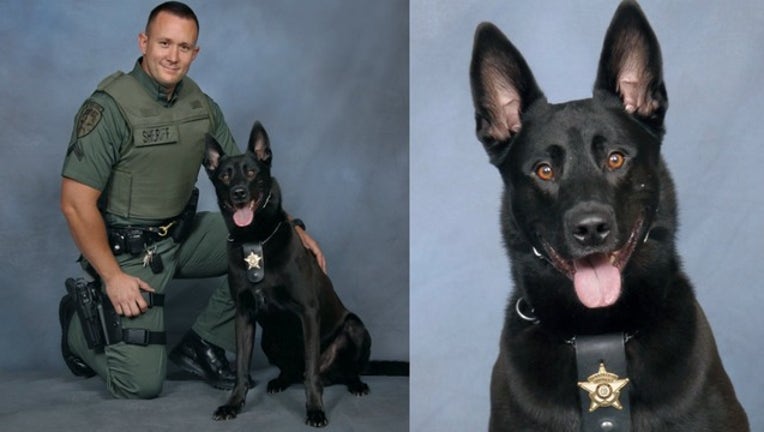 PAULDING COUNTY, Ga. (FOX 5 Atlanta) - The Paulding County Sheriff's Office is mourning the loss of a beloved K-9 after a series of tragic events last week.

K-9 Verro was an 8-year-old Belgian Malinois handled by Corporal Brandon Kilgore. The two had been partners for over seven years in Paulding County.

Last Friday, Kilgore and other deputies were responding to a domestic dispute in Dallas, Georgia. K-9 Verro didn't meet "departmental criteria" to be deployed when his handler responded to the scene, so he was kept in the patrol vehicle.

However, K-9 Verro wanted to be with Kilgore and managed to squeeze through the partially opened kennel door separating his vehicle kennel from the driver's compartment. This allowed him to crawl into the front of the SUV. He eventually figured out how to inch his way out of the vehicle in an attempt to assist his handler.

The scene was described as "chaotic" and no deputies were aware Verro had escaped from the vehicle.

K-9 Verro spotted a deputy sprinting away from him and without his handler's direction, he couldn't differentiate between a deputy and suspect. So, Verro apprehended the deputy by grabbing the back of his leg and biting him, per his training.

The deputy who Verro was biting had no idea he was a K9 deputy and since he was unable to remove the dog from biting his leg, he followed his training by shooting and killing the canine.

"This has been a devastating incident that has shaken our office to its core," Sheriff Gary Gulledge said. “Being a former K-9 handler, I know how special the bond is between a handler and his dog.  The emotional grief everyone is going through, including the Deputy who was bitten, has been overwhelming.  Please keep Corporal Kilgore, his family, the K-9 Unit, our injured Deputy, and the Sheriff’s Office in your prayers as we all go through this difficult time.”

Verro was a dual purpose canine, remembered as an exceptional member of the Paulding County Sheriff's Office.