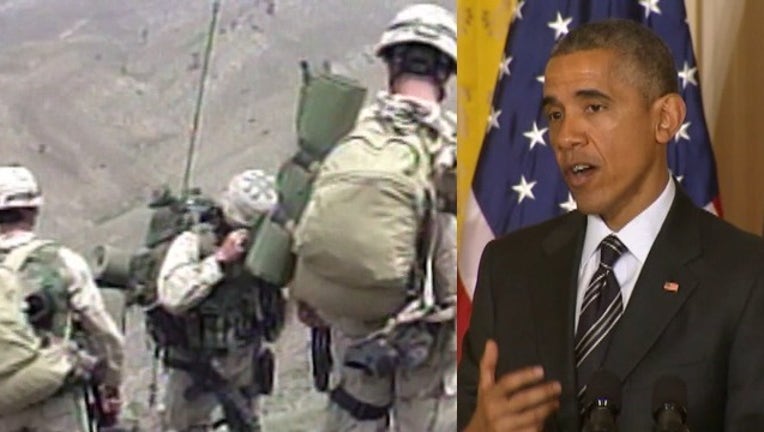 WASHINGTON (AP) — President Barack Obama announced plans Thursday to keep nearly 10,000 U.S. troops in Afghanistan through most of next year and 5,500 when he leaves office in 2017, casting aside his promise to end the war on his watch and instead ensuring he hands off the conflict to a successor.

Obama called the new war plan a "modest but meaningful" extension of the U.S. military mission in Afghanistan, which he originally planned to end next year. He acknowledged America's weariness of the lengthy conflict but said he was "firmly convinced we should make this extra effort."

Military leaders have argued for months that the Afghans needed additional assistance and support from the U.S. to beat back a resurgent Taliban and hold onto gains made over the past 14 years of American bloodshed and billions of dollars in aid. In his remarks from the White House Thursday, Obama said that while Afghan forces have made progress, the security situation in the country remains fragile.

After lengthy internal deliberations, Obama settled on a plan to maintain the current force of 9,800 troops in Afghanistan through most of next year, then draw down to 5,500 troops in 2017, at a pace still to be determined after consultation with commanders.

It will be up to Obama's successor — the third U.S. commander in chief to oversee the war — to decide how to proceed from there.

"I suspect that we will continue to evaluate this going forward, as will the next president," Obama said, standing alongside Vice President Joe Biden, Defense Secretary Ash Carter and Joint Chiefs Chairman Gen. Joseph Dunford.

Until now, Afghanistan has barely been a factor in the 2016 presidential campaign. But Obama's announcement could send candidates in both parties scrambling to outline their own plans for a war they could inherit.

Several Republican candidates welcomed Obama's decision, but still used it as an opportunity to criticize the president's foreign policy.

"I think it is the right thing to do," New Jersey Gov. Chris Christie said in a radio interview. "I think the president may be in some small way waking up to the fact that disengaging America from the world and allowing there to be safe havens for terrorists is not the right way to protect American homeland security and national security."

Former Florida Gov. Jeb Bush said he was glad Obama "dropped his plan to abandon the region entirely." But he added that if the president is committed to securing a stable Afghanistan, "he shouldn't shortchange what our military commanders have said they need to complete the mission."

According to a defense official, the president approved the highest number of troops requested by commanders, with the greatest amount of flexibility. Key to the commanders' requests was a continuation of the current counterterrorism mission, which Obama said would indeed be part of the effort after 2016.

The second part of the U.S. mission is training and assisting Afghan security forces, which are now in charge of combat operations across the country. The American forces will be based in Kabul and at Bagram Air Field, as well as bases in Jalalabad and Kandahar.

Obama now faces the prospect of passing on to his successor active U.S. military missions in two countries he vowed to withdraw from: Iraq and Afghanistan.

The president did withdraw most U.S. troops from Iraq in late 2011, an action he heralded as a promise kept to a war-weary America. But the rise of the Islamic State drew the U.S. military back into Iraq last year to train and assist local security forces and to launch airstrikes, a campaign Obama has said will likely last beyond his term in office.

On Thursday, Obama insisted he wasn't disappointed to not be fulfilling his pledge to withdraw U.S. troops from Afghanistan before he leaves.

U.S. officials have hinted at the policy shift for weeks. They have noted that conditions in the country have changed since his initial decision on a sharper troop withdrawal timeline more than two years ago. The White House also has been buoyed by having a more reliable partner in Afghan President Ashraf Ghani, who succeeded the mercurial Hamid Karzai last year.

The president's decision was reinforced when Taliban fighters took control of the key northern city of Kunduz late last month, leading to a protracted battle with Afghan forces supported by U.S. airstrikes. During the fighting, a U.S. air attack hit a hospital, killing 12 Doctors Without Borders staff and 10 patients.

Beyond the recent security troubles in Afghanistan, U.S. commanders have expressed concern about Islamic State fighters moving into the country and gaining recruits from within the Taliban.

Officials said discussions on staying in Afghanistan longer began during Ghani's visit to Washington in March. The top U.S. commander in the country, Gen. John Campbell, recently presented Obama with a range of options calling for keeping more troops there, based on his judgment of what it would take to sustain the Afghan army and minimize the chances of losing more ground.

Officials said NATO allies had expressed support for extending the troop presence in Afghanistan, but they did not outline any specific commitments from other nations.