The non-peer reviewed study comes after 1.7 million of the tests have been shipped to all 50 states and the District of Columbia, according to Abbott Labs.

Researchers said that they were looking for a testing platform with the shortest turnaround time. They found that the Abbott ID NOW test was capable of producing positive results in as little as five minutes.

RELATED: Some US airlines reportedly won’t force passengers to wear masks during flights

If confirmed, the study indicates a high rate of false-negative results.

"Based on our findings we could argue that the Abbott ID NOW detects samples with high viral load or possibly viable virus that could be of importance for transmission," the researchers concluded. "But, the fact that it misses positive samples on patients being admitted to the hospital with clinical picture of COVID19 makes this technology unacceptable in our clinical setting.“

Abbott Labs disputed the findings, saying that what the researchers discovered does not match their own research. An Abbott spokesperson told FOX Business that their findings reported a rate of false negatives at 0.02 percent.

"Once again, a study has been conducted using ID NOW in a manner that it’s not intended to be used," the spokesperson said. "It’s unclear if the samples were tested correctly and we’re further evaluating these results.“

Despite the findings from the report, Abbott Labs said it is continuing to “ramp up production” for their COVID-19 tests.

Throughout the pandemic, President Donald Trump has repeatedly boasted that the U.S. has the best testing. That’s at least true at the White House. Anyone who comes into close contact with Trump and Vice President Mike Pence must take a test before meeting with them. 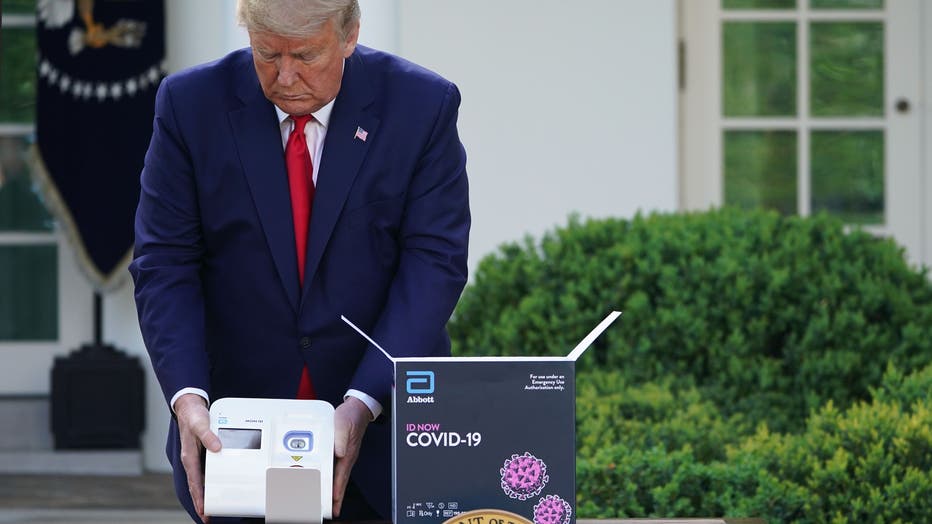 FILE - US President Donald Trump holds a 5-minute test for COVID-19 from Abbott Laboratories during the daily briefing on the novel coronavirus, COVID-19, in the Rose Garden of the White House in Washington, DC, on March 30, 2020. (Photo by MANDEL NGAN/AFP via Getty Images)

But even with robust testing, the virus still managed to reach the West Wing. White House officials said one of the aides who recently tested positive, Pence press secretary Katie Miller, tested negative one day before she got a positive test result on Friday.

Ordinary Americans being expected to go back to work -- like those laboring at meatpacking plants that Trump has ordered to remain open — won’t have that kind of access to testing.

And testing, even when you have it, isn't perfect. Dr. Francis Collins, director for the National Institutes of Health, said during congressional testimony last week that the Abbott ID Now machine, which is used by the White House to perform rapid coronavirus tests, can sometimes fail to detect a patient who is positive.

The incubation period for the virus is days long, so it is possible that a person who had contracted the novel coronavirus could initially test negative.