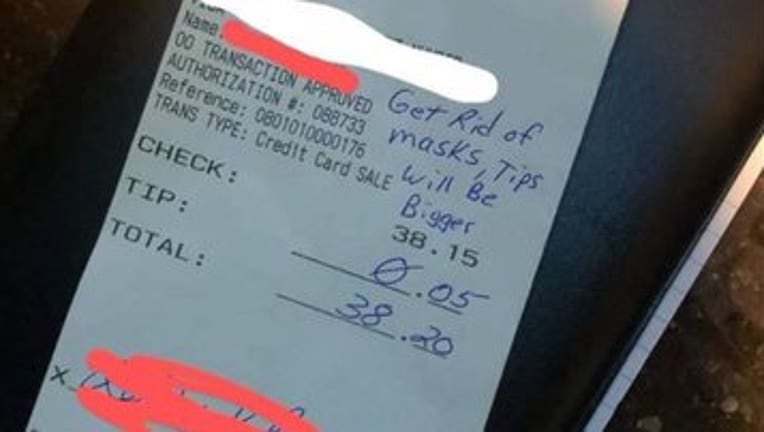 Ali Siverhus posted a photo of a signed receipt she received from a customer she waited on who gave her a 5-cent tip and a note that read “get rid of masks, tips will be bigger.” (Ali Siverhus/Twitter)

LINCOLN, Neb. - A restaurant server in Lincoln, Nebraska couldn’t believe her eyes when she picked up a signed receipt only to see the customer she waited on had left her a 5-cent tip. The reason? “Get rid of masks, tips will be bigger,” the patron wrote.

Ali Silverhus posted a photo of the receipt on Twitter and explained that she was frustrated because she felt she gave good service and the customer did not appear upset with her personally.

“Working in the service industry is tough no matter what’s going on in the world, but this pandemic and obviously impacted it more than anything we’ve seen before," Silverhus said. "We already are down on numbers of customers, so we just ask people to be respectful and tip accordingly because we are risking getting sick to serve you. We aren’t asking people to be over generous, just respectful."

Silverhus added that the customer didn’t seem rude and mostly kept to himself.

“No please or thank you or any of that manner. But I wasn’t surprised that I got a bad tip based off his attitude, I was just surprised at only 5 cents and what he wrote,” she explained. “I was very angry that he left a 5 cent tip over something I couldn’t control and was also wondering how it affected him that I was wearing the mask.”

In a Facebook post, Silverhus expressed her frustration over the tip, saying that she already only makes $3 an hour.

The United States has more confirmed COVID-19 cases than any country in the world.

The financial crisis caused by the COVID-19 pandemic has been especially hard on workers who lost jobs overnight due to the widespread closures implemented in the U.S. to stop the spread of the disease.

Now that some reopenings have occurred, many businesses have not fully recovered and many in the restaurant industry have not necessarily been able to return to work as restaurants adjust to the drastic lack of business because of the ongoing coronavirus crisis.

Some workers, including Silverhus, have gone so far as to turn to social media in desperation to crowdfund money to cover rent and other expenses.