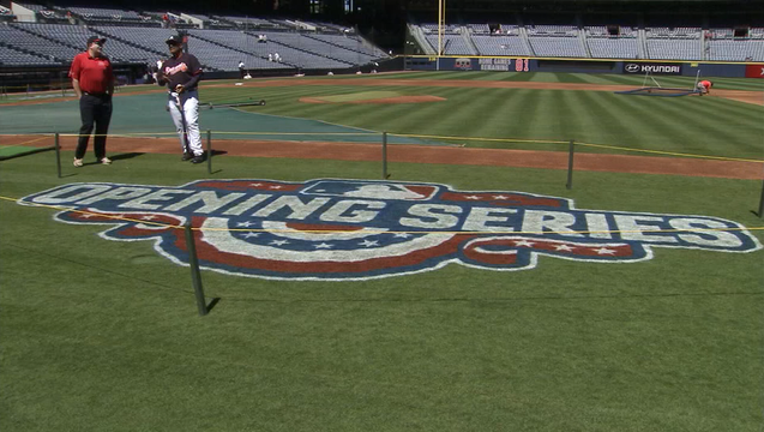 ATLANTA (AP) — Extra innings on the road left Dusty Baker exhausted but happy in his debut as Nationals manager.

"It's kind of like the game telling me, welcome back," Baker said.

Daniel Murphy, also making his Washington debut, was a huge hit with a home run and a go-ahead double in the 10th inning, and the Nationals rallied past the Atlanta Braves 4-3 in their season opener Monday.

"Obviously, what we did late in the game, that just speaks volumes," said Max Scherzer, who allowed two runs and three hits in seven innings.

"To tie the game in the ninth and then find a way to win it, that's just great baseball."

Washington got even in the ninth on Michael Taylor's sacrifice fly to shallow center field. Atlanta nearly escaped with a game-ending double play, but Jayson Werth scored when catcher A.J. Pierzynski dropped Ender Inciarte's accurate throw that beat Werth to the plate.

Murphy's one-out double to left off Eric O'Flaherty (0-1) drove in Ryan Zimmerman from second base in the 10th. Zimmerman reached on a two-base throwing error by second baseman Gordon Beckham.

Murphy also walked twice in his first game since leaving the rival Mets as a free agent and signing a $37.5 million, three-year contract with Washington. The 2015 NLCS MVP set a postseason record last year by hitting a home run in six consecutive playoff games.

Blake Treinen (1-0) pitched a scoreless ninth for Washington. Jonathan Papelbon got three straight outs for the save.

The Braves took a 3-2 lead in the eighth on Shawn Kelley's bases-loaded walk to Garcia.

Harper homered into the right-field seats off Julio Teheran in the first inning. Only 23, the slugger already has four career homers on opening day. He homered twice in the 2013 opener and also connected last year.

Baseball's new "Chase Utley Rule" cost the Braves a baserunner after Nick Markakis walked in the seventh. On Hector Olivera's grounder to third, Markakis slid wide of second base, upending Murphy, whose throw to first was late.

Olivera was ruled out at first for a double play because the slide by Markakis took him too far inside the bag.

Asked if he thought Markakis was too wide on his slide, Baker smiled and said, "That new rule kind of worked in our favor."

The Braves opened their 20th and final season at Turner Field. They will move into new SunTrust Park in suburban Atlanta next season.

Former manager Bobby Cox and members of the 1997 team that opened Turner Field rode around the field in a pregame parade. Among former players returning for the day were Fred McGriff, Javy Lopez, Chipper Jones and Andruw Jones.

Baker said Tanner Roark will start Thursday's home opener against Miami. Joe Ross and Scherzer will follow Roark in the rotation before Gio Gonzalez makes his first start. Baker said Gonzalez was available in the bullpen on Monday.

Baker said he and pitching coach Mike Maddux finally settled on a plan designed to protect the bullpen.

Nationals: Taylor replaced CF Ben Revere to open the fifth inning. Baker said Revere had discomfort in his ribs on a swing. "We think that he's OK," Baker said.

Braves: Now that Freeman's right wrist appears to be pain-free, manager Fredi Gonzalez said he wants to protect the slugger with an occasional day off. Gonzalez acknowledged it won't be easy. "He can ask all he wants, but he can't force me out of the lineup," Freeman said with a laugh.

Nationals: RHP Stephen Strasburg will try to improve his unimpressive career numbers against Atlanta on Wednesday in the second game of the series. Strasburg is 6-7 with a 3.77 ERA in 19 career starts against the Braves, including a 3-3 mark and 4.79 ERA in nine starts at Turner Field.

Braves: RHP Bud Norris, who won 15 games for Baltimore in 2014, will try to move past a disappointing 3-11 record with the Orioles and Padres in 2015 when he makes his debut with Atlanta. Norris was 1-3 with a 6.46 ERA in six spring starts.