Marjorie Taylor Greene, Lauren Boebert chant in opposition to Joe Biden during State of the Union

WASHINGTON, D.C. - Georgia Rep. Marjore Taylor Greene and a GOP colleague chanted in opposition to President Joe Biden during his first State of the Union address on Tuesday night.

Biden was remarking on his administration's immigration policy midway though his speech at the U.S. Capital.

"Folks, if we are to advance liberty and justice, we need to secure our borders and fix the immigration system," Biden said. 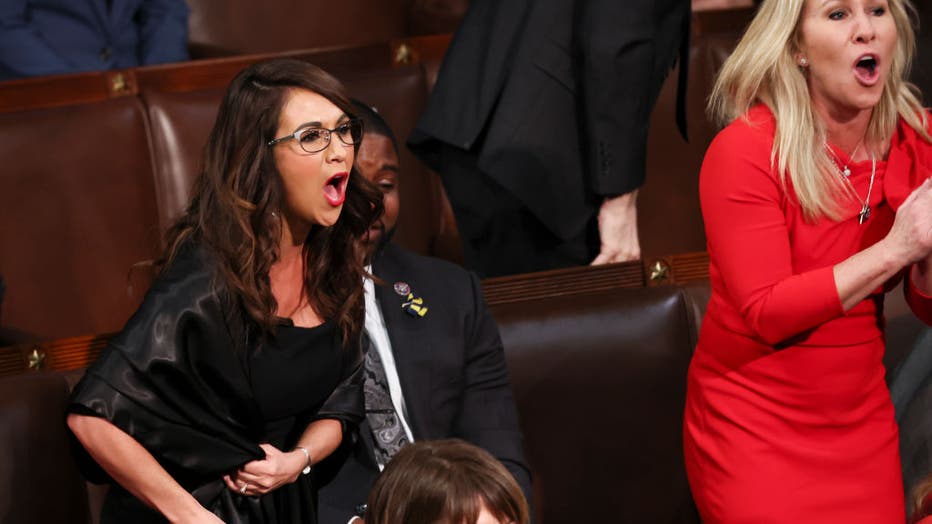 Several people in the gallery were heard chanting, "Build the wall" — Greene and Colorado Republican Lauren Boebert. The chant was likely in reference to Former President Donald Trump's campaign promise to build a wall along the southern U.S. border with Mexico. Biden officially ended the "national emergency," which Trump declared to utilize Pentagon funds to build the wall along the U.S.-Mexico border.

WHAT DID THE 'HECKLER' SAY DURING STATE OF THE UNION?

During the State of the Union, Biden went on to say he believes both border security and a simpler immigration system are attainable. Biden said technology and increased patrols are targeting drug and human traffickers.

Biden said his administration is installing immigration judges to speed up cases. He expressed his belief partnerships with Central and South American nations will help them secure their own borders.

STATE OF THE UNION: FULL TEXT

Biden said he wants to provide a pathway to citizenship for Dreamers, immigrants with temporary status, and other essential workers.

"It’s not only the right thing to do — it’s the economically smart thing to do," he said.

Greene recently received backlash after a crowd erupted in chants of "Putin," while she spoke at a weekend rally.

Greene criticized Biden's address in her own post-speech remarks.

"In just over a year of Joe Biden's presidency, we have a wide open border where border patrol and I.C.E.  have their hands tied behind their backs," she said.

House Republicans were critical of Biden and Democrats prior to the president's address, including challenges at home over jobs and immigration.

Earlier in the speech, Biden spoke about helping soldiers who came home sick from Iraq and Afghanistan with toxic burn pits and the cancers that would one day put them in a "flag-draped coffin."

Boebert shouted, "You put them in! 13 of them." Boebert's response was likely related to the 13 U.S. service members who were killed in a suicide bombing at Kabul airport in Afghanistan in August 2021.