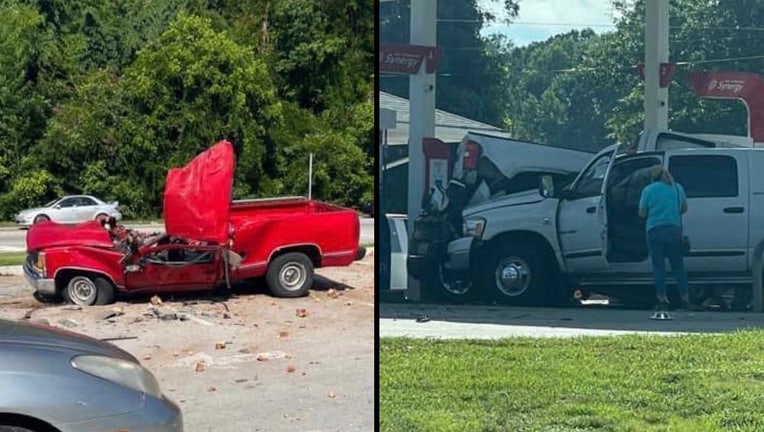 The Paulding County Sheriff's Office said the crash happened around 10 a.m. on Sunday at an Exxon station off of Ga. Highway 101 in Dallas.  (FOX 5 Atlanta)

PAULDING COUNTY, Ga. - The Paulding County Sheriff's Office said a man died at a hospital after he allegedly crashed his truck intentionally and turned a gun on himself at a gas station. Authorities said multiple bystanders were injured.

Deputies said injuries to bystanders at the gas station were not believed to be life-threatening.

The Paulding County Sheriff's Office said the crash happened around 10 a.m. Sunday at an Exxon station off of Ga. Highway 101 in Dallas.

The preliminary investigation indicated a GMC Sierra was moving south on the highway before the driver "purposefully" drove off the road and through a sign. Investigators said the truck struck multiple vehicles in the parking lot of the store, including the gas pumps.

Deputies said the driver allegedly brandished a handgun when bystanders went to check on him. Witnesses told investigators the man shot himself in the head. The man was immediately treated and rushed to the hospital when first responders got to the gas station.

Multiple people were injured at the gas station, but deputies said none of their injuries appeared to be life-threatening.

If you have any information about this incident, send investigators a message on the Paulding Sheriff mobile app or call the Criminal Investigations Tip Line at 770-443-3047.