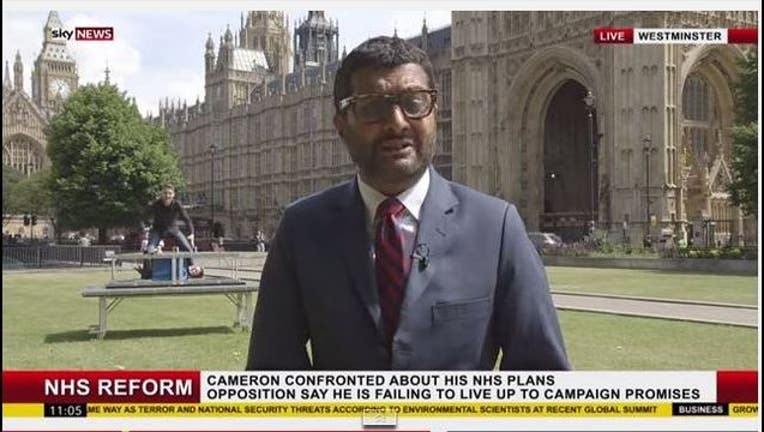 Ah, the beauty of live television. As a 15-year veteran of TV news, I can totally relate to this reporter. So often you just are out in the field, trying to do your job - getting the "who, what, when, where, why and how," and then you have to pull it all together with very little time and smoothly bring it to the audience at home via live shot - when someone decides to throw a curve ball in the works and pull some foolery behind you.

We've all seen the drunk guy wander up and utter something "interesting" and usually full of expletives. Or how about the streaker or background dancer or guy who drives by and screams "Hey baby what's your number!"

And the whole time, as a professional, you do your best to ignore it and not lose your cool. And honestly sometimes you don't even see it until a producer says something in your earpiece or you see it later on a viral YouTube clip and cringe.

In this instance, Sky News reporter Ashish Joshi seemed to do the latter as these magicians pulled off a great trick. But perhaps Joshi was the best trickster of all because unbeknownst to us, he was in on the joke the whole time. Well played sir, well played.