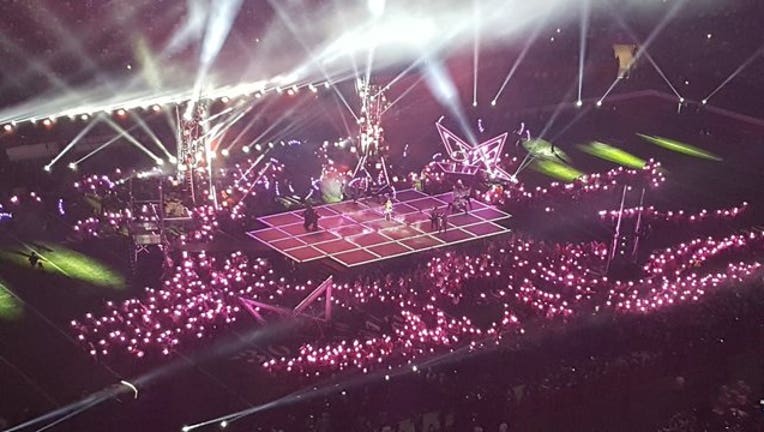 NEW YORK (AP) - Lady Gaga dropped from the top of Houston's NRG Stadium to open her halftime show and dropped the mic at the end, offering a program that delivered high-energy hits and an inclusive theme.

With the nation on edge politically, the NFL had little taste for a show that would ruffle feathers, as Beyonce did in some circles last year with the Black Power messaging of "Formation." Gaga plainly listened.

She was patriotic from the start, opening with snippets of "God Bless America" and "This Land is Your Land" with red and blue lights twinkling above her, before guide wires delivered her to the stage below. Her hit "Born This Way" became a gay rights anthem but in the context of Sunday's show fit into the idea of accepting differences, a thread through much of the game's commercial messaging.

Once onstage, she commanded a large troupe of dancers and musicians, props that breathed fire and audience members swinging lights in synchronization - the usual excess that has become a Super Bowl cliche.

Yet Gaga commanded the show herself, unlike many predecessors who brought in guest stars to bolster their act. An expected appearance by Tony Bennett, a frequent duet partner, didn't take place. He was relegated to a brief role in a commercial.

With that pressure, Gaga acquitted herself well. Hits like "Poker Face" and "Just Dance" were frothy and fun. Her best performance came in her least-known song: "Million Reasons," where she sat at the piano and explored a new style that has advanced beyond the dance pop of her youth.

The finale "Bad Romance" was a crowd pleaser. Gaga, who had spent much of the evening in a metallic space suit, emerged in her third outfit of the performance, a midriff baring costume topped off by football-like shoulder pads. She threw down the microphone and jumped off a platform to disappear at the end.

She promised inoffensiveness and good vibes - and mission accomplished.

The Super Bowl halftime show, with an audience usually topping 100 million, is easily the biggest show of an artist's career. It's so attention-getting that Las Vegas even set odds on what color Gaga's hair would be. Those who bet blonde took home some money.

Before the game, singers Phillipa Soo, Renee Elise Goldsberry and Jasmine Cephas Jones - the Schuyler sisters from the original cast of Broadway's hit "Hamilton" - brought exquisite three-part harmony to a version of "America the Beautiful." They made an inclusive editing choice, with Jones adding "and sisterhood" to the lyrical reference of brotherhood.

Country star Luke Bryan played it straight for "The Star Spangled Banner," adding few showy flourishes while taking care not to rush through the moment.