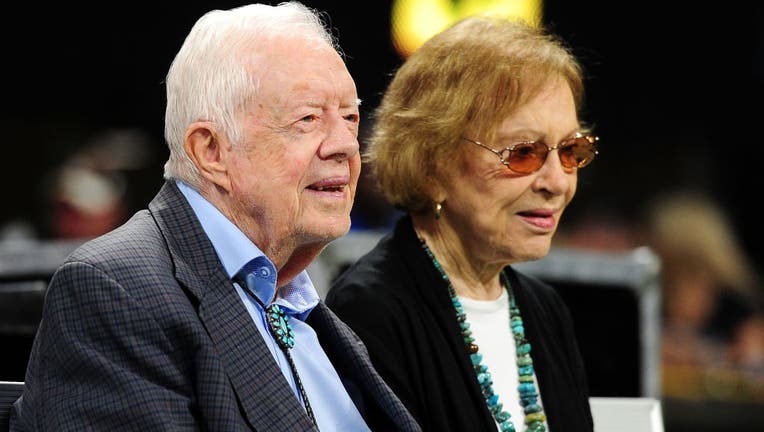 Former president Jimmy Carter and his wife Rosalynn prior to the game between the Atlanta Falcons and the Cincinnati Bengals at Mercedes-Benz Stadium on September 30, 2018. (Photo by Scott Cunningham/Getty Images)

Thursday, the United States agreed to accept up to 100,000 people escaping from the war and to increase support for Eastern European nations that have taken in most of the people fleeing Russian forces.

US TO ACCEPT UP TO 100,000 UKRANIAN REFUGEES, EXPAND RUSSIA SANCTIONS

While in Brussels to meet with European allies, President Joe Biden said the United States would admit up to 100,000 Ukrainian refugees and provide $1 billion in humanitarian assistance to countries affected by Russia’s invasion of Ukraine.

"This is not something that Poland or Romania or Germany should carry on their own," said Biden, who said he hopes to meet with refugees on his European trip. "This is an international responsibility."

The White House has said for weeks that the U.S. would welcome Ukrainian refugees at some point, so the announcement wasn’t a surprise. Officials have said, and continue to maintain, that most of the refugees want to remain in Europe because they have family there and can more easily return home once it’s safe.

Officials estimate there around 3.6 million refugees and millions more displaced within Ukraine.

In a statement released by the Carter Center, the Carters said that "our nation has long been a beacon of hope for those fleeing violence or prosecution."

"As honorary co-chairs of Welcome.US, we urge Americans to open their hearts to these refugees and support them as they work to build new lives here among us. We stand with the people of Ukraine in their courageous fight for democracy and freedom," the Carters wrote.

War in Ukraine: Metro Atlanta woman fears tensions may spread to nearby Romania

A woman tells FOX 5 she is concerned her friends and loved ones living in neighboring Romania may soon be impacted by the ongoing Russia-Ukraine tensions.

Who are the refugees and where will they go?

Among the first Ukrainians refugee coming to the U.S. will be those who have family already in the United States, Biden said at a news conference.

U.S. refugee efforts will also focus on helping refugees who are considered particularly vulnerable following the Russian invasion, groups that include LGBTQ people, those with medical needs as well as journalists and dissidents, according to administration officials, who spoke to journalists on condition of anonymity to discuss the plan before the public announcement.

The administration did not provide a timeline but it’s typically a lengthy process and the officials said all 100,000 may not necessarily arrive this year. Most of the refugees probably will settle in parts of the U.S. that already have large concentrations of Ukrainians. Such areas include the New York City area, Pennsylvania, Chicago and Northern California.

Not relative to the need, considering the number who have already fled Ukraine and the millions more who are displaced within the country.

It’s also not large by historic standards. The U.S. took in more than 200,000 refugees, mostly from Southeast Asia, in 1980 alone. The total between 1975-1981 was more than 735,000, according to State Department figures. Since August, when the U.S. withdrew from Afghanistan, the U.S. has admitted more than 76,000 Afghans, including large numbers of former military interpreters and their families.

The administration, in consultation with Congress, set the annual cap of refugees for the 2022 budget year at 125,000, a total that does not include the evacuated Afghans. The administration says it does not immediately plan to seek to raise the cap because many of the Ukrainians can be brought to the U.S. under humanitarian parole or family reunification programs that are not counted against this cap.