Classmates found out Tuesday morning the grave news. A parent and student said they feel the safety measures in place are not enough to protect students.

ATLANTA - More Georgians are being diagnosed with COVID-19 than ever before, as the state passed its previous January high for positive tests Tuesday.

The rolling seven-day average for positive COVID-19 tests rose to 9,641 per day Tuesday, topping the previous Jan. 11 high of 9,635, according to Georgia Department of Public Health figures.

Infections continue to rise as more schools send children home to learn remotely. The 21,000-student Bibb County district became the largest to announce a long pause of in-person instruction, saying students would not return to buildings after Labor Day and would remain remote until Sept. 20.

"We are going to take the next two weeks to pause in-person learning and hopefully ensure that when students return, our schools will still be safe," Superintendent Curtis Jones said in a statement. Bibb County is among the Georgia districts that have been requiring masks and other precautions, but Jones said the virus is spreading rapidly outside of schools in the Macon area.

The 29,000-student Richmond County district announced all Augusta students would learn from home for two days after Labor Day to allow employees to clean schools.

At least 200,000 Georgia students have had their school schedules disrupted because of COVID-19, with some districts taking days off, some shifting to every-other-day schedules and some sending home individual schools or grades. That’s more than 11% of Georgia’s 1.7 million public school students.

In northwest Georgia, the Floyd County coroner said a 13-year-old boy who earlier tested positive for COVID-19 died Tuesday after his father discovered he had stopped breathing before dawn. Coroner Harold Proctor said the boy’s cause of death is listed as "respiratory failure due to COVID-19."

"He was kind-hearted," said Caralina Willitts, a sophomore at the school who had classes with the boy. "He had the warmest heart to where he was nice to everybody."

As COVID cases surge, patients face long wait times and staff are stretched. The FOX Medical Team looks inside the situation of one metro Atlanta ER.

Officials say the rapid spread among children is a new aspect of the pandemic. Public Health Commissioner Kathleen Toomey said Monday that cases have skyrocketed since schools opened in early August.

She said public health officials tracked more than 170 outbreaks statewide last week, the highest number since the pandemic began, with more than half of them in schools.

"So schools are a site of where there is transmission going on," Toomey said.

More than half of Georgia’s students are now under a mask mandate, according to announcements tracked by The Associated Press, but state officials have left it to local officials to decide. 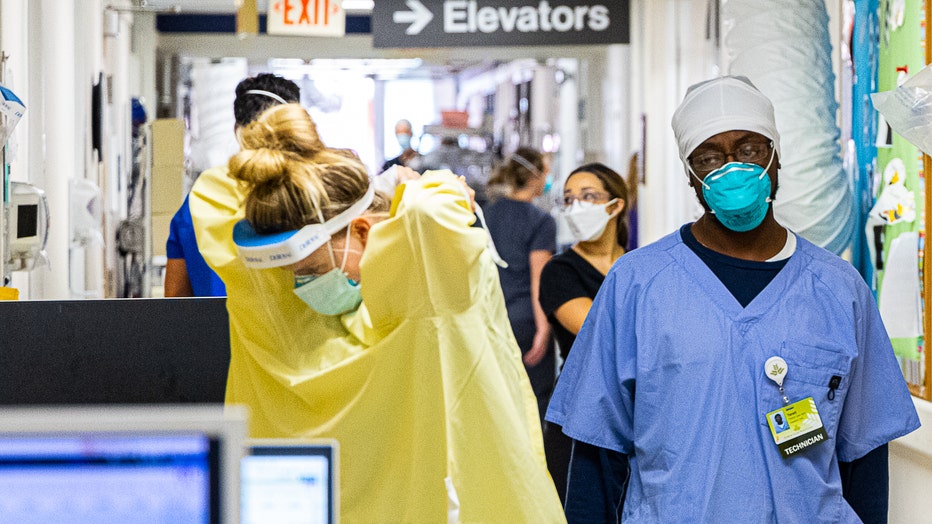 The number of people hospitalized statewide with the respiratory illness approached 5,700 Tuesday, just below the all-time record.

Toomey told reporters Monday that in at least two incidents, public health staffers have been harassed by people opposing vaccination.

In a south Georgia county, Department of Public Health spokesperson Nancy Nydam said some public health employees received "messages of hostility and misinformation about vaccinations" on social media accounts. In north Georgia, Nydam said a mobile vaccination event was shut down after a group of people yelled at the staffers and called them names.

"Aside from feeling threatened themselves, staff realized no one would want to come to that location for a vaccination under those circumstances, so they packed up and left," Nydam said.

MORE: Planning a Labor Day weekend trip? These safety tips may help you avoid getting sick

Nydam said she didn’t know when the incidents happened and declined to release the locations, saying it could make harassment worse.

"Maybe it comes with the territory for someone of my position, but it shouldn’t be happening to those nurses who are working with you to try to keep this state safe," Toomey said.