An Atlanta man who was living in a tent behind a home doesn't just have a home, but a group of friends.

ATLANTA - A man who has been living in a tent near Freedom Park in Atlanta now has a place to call home, thanks to the kindness of strangers.

Tracey Hardin and his cat 'Patches' lived inside a tent for about a year and a half.

His friendship with Lynne Dale is one that started under the most unlikely of circumstances.

Dale said she could see Hardin from the window of her home.

"We became aware many months ago that there was a man living in a tent right behind the house. Right on the other side of our fence," Dale said. "We would hear him calling out at night. We'd hear him call, 'Patches, Patches!'"

Dale and her husband started to get to know Hardin. They learned he was approved for city-funded housing but was still waiting to get an apartment.

Dale said the city of Atlanta tried to clear Hardin out of the area and that's when she knew she had to step in to help him.

In just over a week, the GoFundMe raised over $35,000, enough to get Hardin his own apartment with rent paid for two years.

Hardin and Patches were able to see their new home on Monday. Hardin was overcome with emotion as he looked around for the first time.

"It's perfect. I got a home. I got a home and I feel so good about it because if it weren't for Lynn and Charles, I wouldn't have a home," Hardin said. 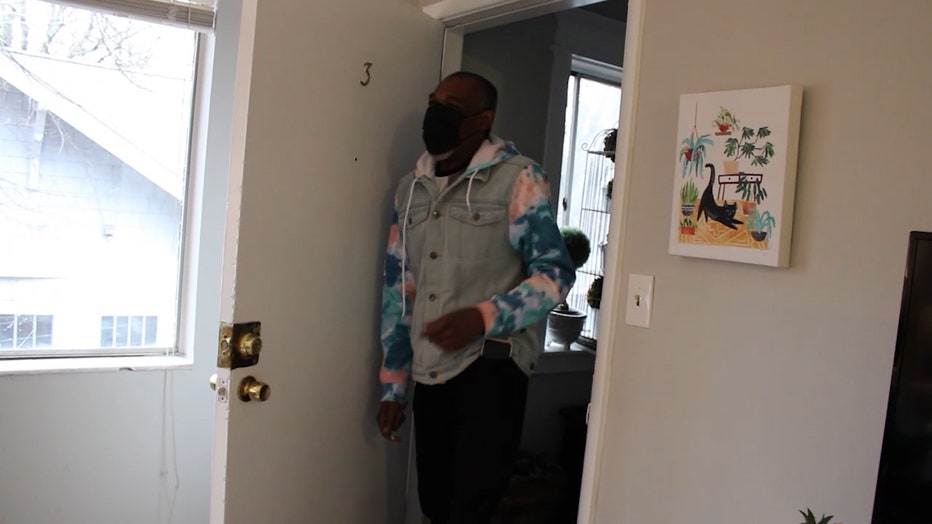 While donors on GoFundMe helped pay for rent, other generous donors like actress Elaine Hendrix made sure he moved into a completely furnished apartment.

"It's really vital and really important to remember that we are fellow humans. It's not just a homeless person invading my space. It's another human being whose life is being greatly impacted," Hendrix said.

She initially donated to the fundraiser but was able to donate the majority of furniture for Hardin's news home.

Hendrix said she didn't know Dale personally, but saw the fundraiser on the NextDoor app.

"For someone who right now has a little bit more to take an interest and get that involved, it really moved me," Hendrix said.

Hardin said he's gained so much more than just a roof over his head. He said he's gained a family in Dale, her husband, as well as all the strangers who were able to help him start the next chapter of his life.

"God gave me two beautiful people. I love them with all my heart and my soul," he said.

Anyone who would like to help Hardin can do so here.