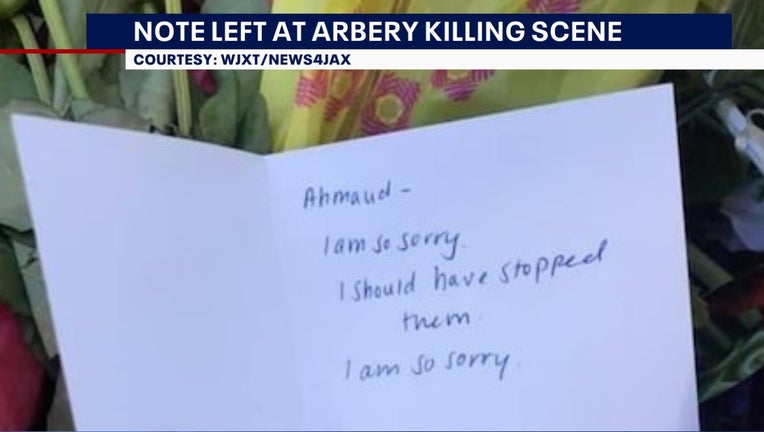 An unsigned card left along the road where Ahmaud Arbery was killed reads "Ahmaud, I am so sorry. I should have stopped them. I am so sorry." (Jenese Harris / WJXT)

BRUNSWICK, Ga. - A handwritten note apologizing for the deadly shooting of a jogger was found at the scene where Ahmaud Arbery died. People in the Brunswick community want to know who wrote the mysterious note that is short in length, but long on remorse.

The handwritten note, discovered by Jacksonville station WJXT, simply reads, "Ahmaud, I am so sorry. I should have stopped them. I am so sorry." No name is signed on the note. The Georgia Bureau of Investigation would not comment on whether they are trying to find the person who wrote it.

Ahmaud Arbery's mother, Wanda Cooper-Jones, says she feels no remorse for the father and son arrested for killing her son and hopes prosecutors pursue the death penalty.

Agents with the Georgia Bureau of Investigation told FOX 5 that they have identified the individual who wrote the note. They said the author is not connected to the Ahmaud Arbery murder investigation in any way.

"This person was expressing their condolences for Arbery’s death. We’ve received numerous tips and inquiries related to this and wanted to be sure to update the public," GBI said in a statement.

Meanwhile, Arbery's mother, Wanda Cooper-Jones, has no remorse for the father and son charged with murdering her son. She told TMZ the death penalty is what she wants prosecutors to seek for Gregory and Travis McMichael.

"Coming from the mother's... my point of view. My son died, so they should die as well," Ms. Cooper-Jones replied. 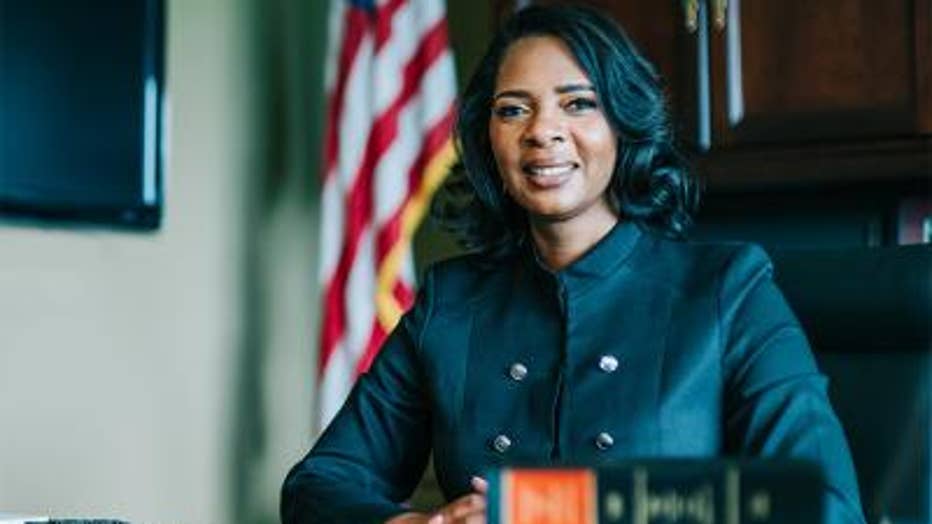 The Glynn County mother said she is encouraged that Cobb County District Attorney Joyette Holmes is now overseeing the case as a special prosecutor.

Ms. Cooper-Jones said Holmes called her earlier this week, but she did not reveal what they talked about. She did say she has confidence in Holmes and her legal team to getting justice served.

Meanwhile, published reports indicate another neighbor said he and the McMichaels encountered Arbery two weeks prior to the deadly shooting. The man said the three of them saw Arbery in the same house under construction on February 11. Arbery's attorneys maintain the 25-year-old is on surveillance video and never took anything from the house.

Ahmaud Arbery, 25, was shot and killed while out jogging in a south Georgia neighborhood on Feb. 23, 2020. (Photo provided by family members)

Ahmaud's mother has said in the past she wants the man who recorded the cellphone video, William Bryan, charged as well. But Bryan has said he was nothing more than a witness.

"I would like for all hands that were involved. That played a part in my son's murder to be prosecuted to the highest," Ms. Cooper-Jones said.