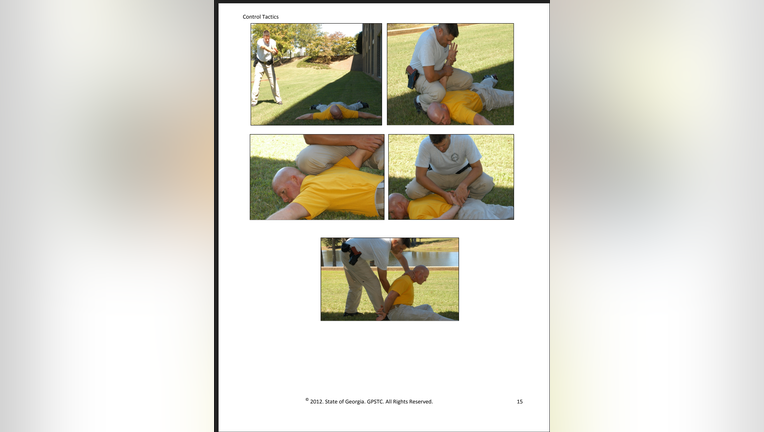 A page from the Georgia Public Safety Training Center manual showing how to use knee restraint on a suspect's shoulder rather than neck.

That technique has long been discouraged in classes virtually all Georgia law enforcement officers must take.

“(What happened in Minneapolis) would contradict any defensive tactics or use of force that we teach,” said GPSTC director Chris Wigginton.

Roughly 1500 recruits a year go through the Public Training Center to learn how to be a Georgia law enforcement officer. Suddenly, they’ve got a real life scenario to understand and avoid. 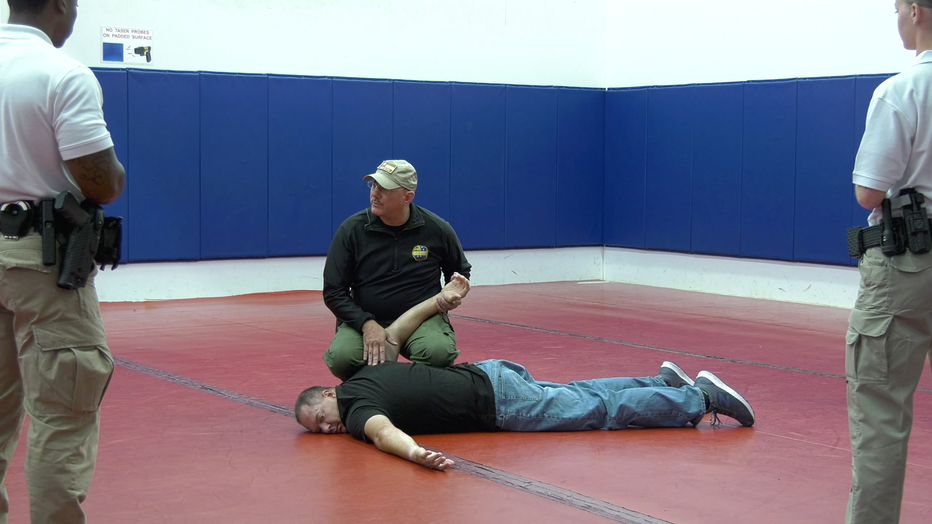 A GPSTC instructor Tuesday teaches recruits how to properly handcuff a resisting suspect without using a knee to the neck.

“We stay off the neck,” an instructor tells his class during a video provided to the FOX 5 I-Team of a Tuesday class on how to handcuff a suspect using upper body control.

It may be the most important lesson taught to a raw recruit: how to take someone into custody so everyone involved survives.

“We don’t want him face down because it’s hard to breathe,” the instructor explains as he had a volunteer cuffed and turned on his side.

Compare that training to what happened in Minnesota that has since set an entire country ablaze.

“Disturbed to be honest with you,” he said. “(Floyd) was not resisting any type of arrest.”

Minneapolis police department policy allows the knee to neck technique as long as the officer doesn’t apply “direct pressure to the trachea or airway.”

But many training experts say it’s just too risky.

The US Justice Department advises “as soon as the suspect is handcuffed, get him off his stomach.”

“Once we get somebody handcuffed, we’re very quick to either get them to their feet or on their buttocks so they can start breathing,” explained Wigginton. “Because when you do restrain someone or cuff their hands behind their back it does restrict breathing.”

Georgia training guidelines suggest a knee to the shoulder if someone is resisting arrest. But in the heat of a struggle, the knee can easily slide to the neck.

When police in Seattle grabbed an alleged looter, an officer’s knee went to the suspect’s neck.

After the crowd yelled, his partner eventually pushed the knee back to the shoulder.

“You take another scenario where someone is actively resisting and flailing around on the ground trying to fight it’s very easy for an officer’s knee or leg to slide down on that neck,” explained Wigginton. “If you inadvertently put it on the neck you get it off very quickly.”

The George Floyd video will be automatically included now for all basic police training, the belief that being able to get everyone home alive each day involves reviewing what cops do wrong, as well as what they do right.