Some Fulton County residents with a criminal record could soon have it wiped clean as of June 19.

ATLANTA - A group is seeking to help at least 300 people clear non-violent offenses off their misdemeanor records before June 19.

The Fulton County Office of Solicitor-General in conjunction with The Temple, Ebenezer Baptist Church, The Georgia Justice Project, and The Martin L. King Sr. Collaborative will be hosting a Juneteenth Record Restriction/Expungement Summit.

Juneteenth has long been celebrated as the time when the "Word of Freedom" finally reached the most distant and long-suffering enslaved people in America. It is in that tradition and spirit of renewed hope, love, and opportunity this group has come together to put on this summit.

"We are excited to partner with our justice-loving friends as we commemorate Jubilee Day, Juneteenth, by removing the barriers created by decades of mass incarceration, poverty, and so many other societal ills that have unnecessarily left so many good people with a criminal record" Removing these old records represents a new kind of freedom," said Keith E. Gammage, Fulton Solicitor-General. 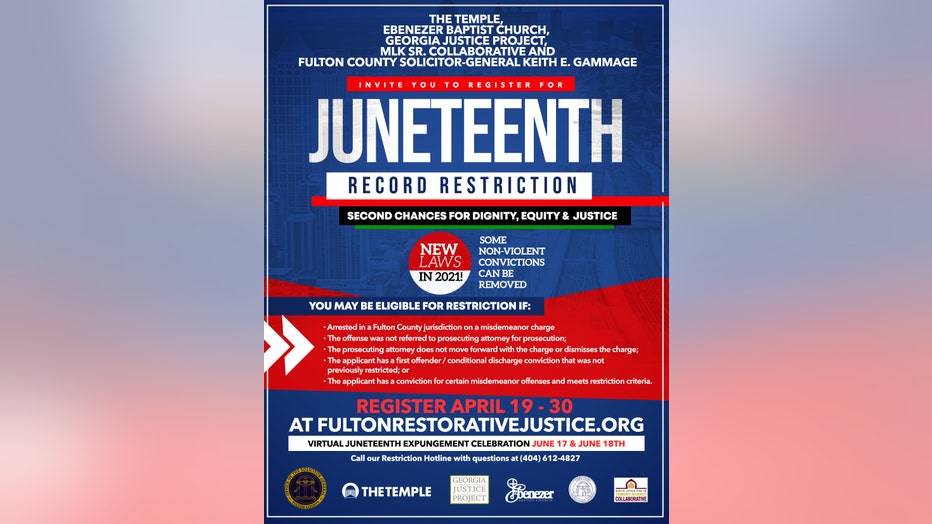 Beginning Monday, April 19, through Friday, April 30, the Fulton County Solicitor-General’s Office will be accepting applications. Those who do not have current pending charges and have had no convictions in the last four years could be eligible.

The solicitor said most family violence crimes, sex crimes, certain theft crimes, and serious driving offenses such as DUI and reckless driving, do not qualify. The crime also needs to have taken place in Fulton County.

An expungement could help with employment, financial, and housing situations.

Anyone interested should apply at FultonRestorativeJustice.org or call the Fulton County Office of Solicitor-General at 404-612-4827.