RIVERDALE, Ga. - Colin Kaepernick’s saga took another turn Saturday - a last-minute audible to nix an NFL-arranged workout and a quick dash 60 miles to the other side of metro Atlanta, where the exiled quarterback staged his own impromptu passing display on a high school field in dwindling light as hundreds of fans cheered him on from behind a chain-link fence.

The former NFL quarterback and activist received a warm welcome by Clayton County public school officials after a last-minute change in his workout venue.

Instead of the planned workout at the Atlanta Falcon's training facility in Flowery Branch, the former NFL quarterback and activist threw passes for about 40 minutes at Charles R. Drew High School in Riverdale.

At the school, Kaepernick declared again that he’s ready to play in the NFL just as long as someone gives him a chance.

Jessie Goree, the chair of the Clayton County Board of Education, said this was not Kaepernick's first visit to the school.

“His fraternity brother let him come over here and work out on Thursday. And today they called and asked if they could use the facility and we said yes," Goree said. 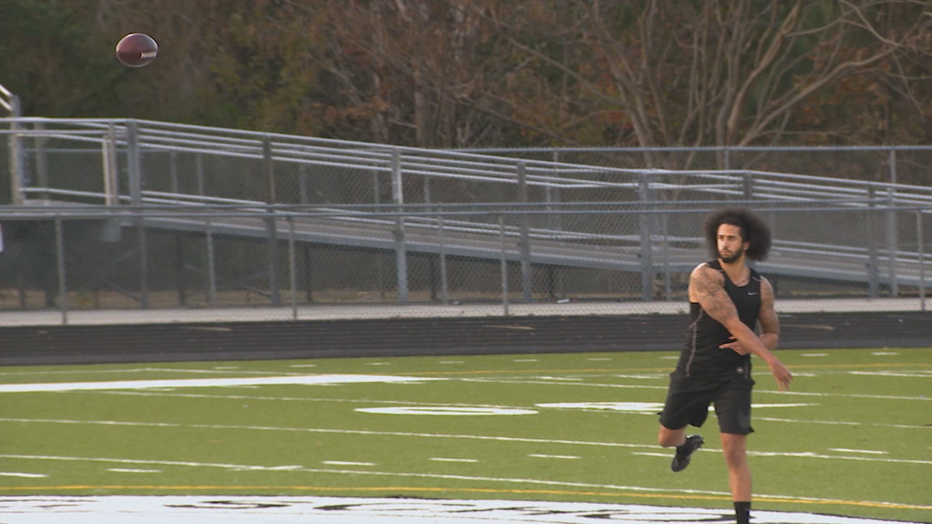 Goree said she understands the controversial nature of Kaepernick's absence from the NFL, but said their decision to allow him to work out at the high school was a way to teach students about the importance of taking a stand.

When he finally got on the field, Kaepernick threw passes to receivers Bruce Ellington, Brice Butler, Jordan Veasy and Ari Werts.

Former 49ers teammate Eric Reid, who joined Kaepernick in his kneeling protest and a collusion lawsuit against the league, watched the session from a bench on the sideline.

Reid, who is now a safety for the Carolina Panthers, left the workout about halfway through to get back to Charlotte. His team, in an interesting twist, hosts a game against the Falcons on Sunday. 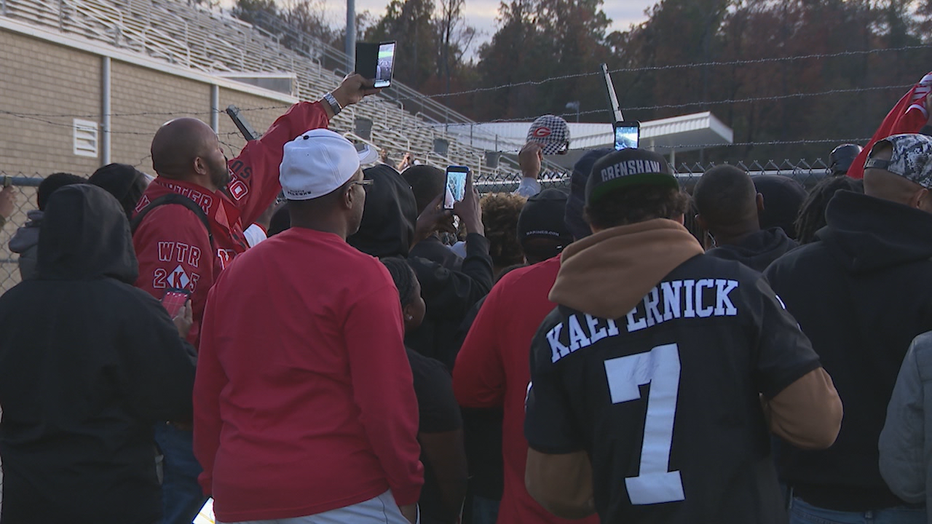 “I think there could be a positive outcome,” Veasy said. “At the end of the day, any progress is good progress.”

But Jeff Nalley, Kaepernick’s agent, didn’t sound as hopeful. His client hasn’t played in the NFL since the 2016 season.

“If teams want to see him, they will ask to work him out,” he said. “No team asked for this workout.”

Nalley said he feared all along that there was “an ulterior motive” behind the NFL’s offer to stage an unprecedented, combine-style workout for one player - especially since Kaepernick was given only two hours to accept or reject it. The league turned down his requests to move the workout to a later date or to hold it on a Tuesday, when more coaches and general managers would be likely to attend since that is an off day for most teams.

In a statement, the NFL said it was “disappointed that Colin did not appear for his workout.” The league referenced recent negotiations with Kaepernick’s representatives over the workout and cited issues that included media availability and a liability waiver. 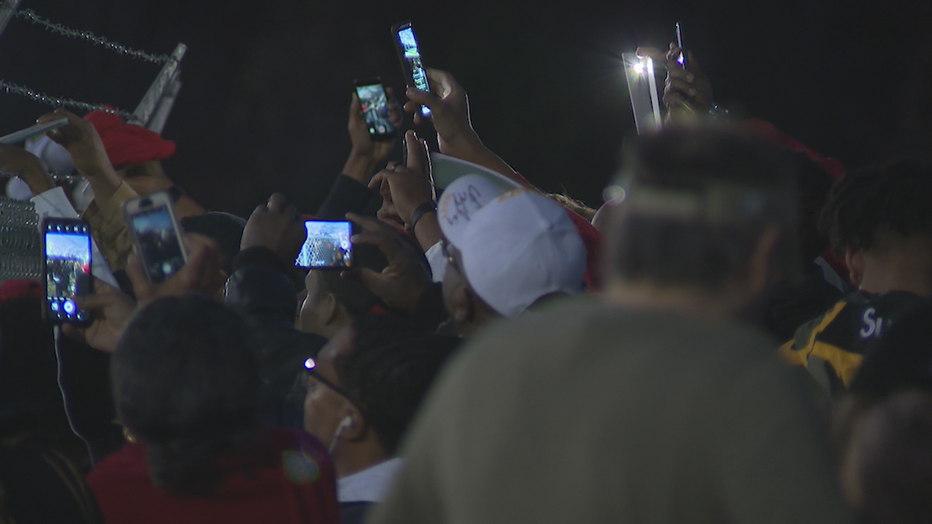 “Colin's decision has no effect on his status in the league. He remains an unrestricted free agent eligible to sign with any club,” the NFL said.

The league in February settled a collusion grievance filed by Kaepernick and Reid.

Nalley acknowledged that he had already made arrangements for a different site if talks with the league broke down.

“You’ve always got to have a backup plan,” he said.

Kaepernick's representatives said the NFL "demanded" as a precondition for this workout that he sign an "unusual liability waiver." Kaepernick also wanted his own film crew to attend and videotape the session, which the NFL rejected.

“Our biggest thing with everything today was to make sure we had transparency in what went on,” Kaepernick said. “We weren’t getting that elsewhere, so we came out here.” 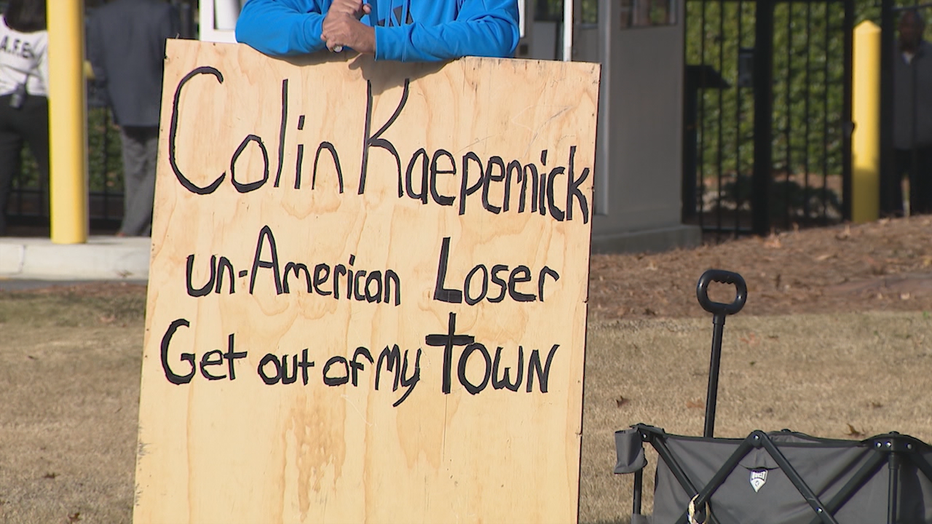 While 25 team representatives were expected to show up to the workout, only eight followed to the new location, including Philadelphia Eagles vice president of football operations Andrew Berry. It appeared the New York Jets, Kansas City and Washington also had scouts in attendance.

They stood along the sideline, jotting into their notepads as Kaepernick tossed passes to four free-agent receivers.

The crowd quickly grew at the high school as news spread that Kaepernick was in Riverdale, lining the fence to watch him throw passes.

“I recognized exactly where the field was so I decided on the 15-minute drive," said Rakim Watson. "I’m just glad he got the opportunity to come down to the south side and he looked real good.”

After the workout, Kaepernick spent some time signing autographs as people passed him shirts, hats, and other items through the fence.

The location of Colin Kaepernick's NFL workout changed shortly before it was scheduled to start on Saturday afternoon due to Kaepernick's desire for transparency.