The family of a teen that was shot and killed at a downtown Atlanta hotel is urging the Atlanta Police Department to consider other who were present as possible suspects in the case.

ATLANTA - The family of a 16-year-old girl who was shot to death at a downtown Atlanta hotel this past weekend wants to know why she was there and why others have not also been charged in the case.

Kalecia Williams, 16, was found in the lobby of the Hyatt Regency located at 265 Peachtree Street NE in the downtown hotel district around 12:27 a.m. on Saturday morning suffering from at least one gunshot wound to the groin, police said. She was rushed to an area hospital where she was pronounced dead.

The family of the teenage girl, who they lovingly called "Pinky", was making plans on Wednesday to lay her to rest. Williams' stepfather said Kalecia, who loved pink, was a homebody. 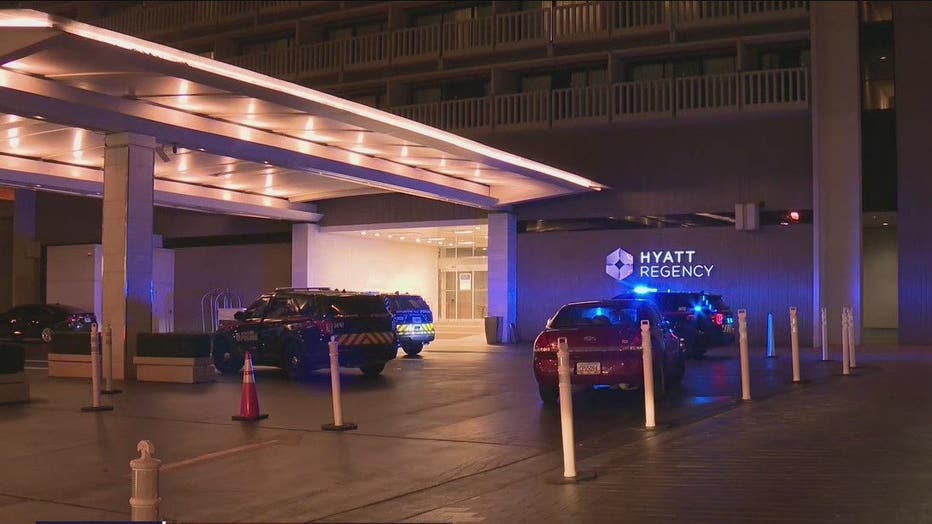 Police investigate the deadly shooting of a teenage girl at the Hyatt Regency in downtown Atlanta on Dec. 26, 2020. (FOX 5)

Most people were desperate to get out of the house when the coronavirus pandemic forced them to stay home, but not Kalecia.

"I said 'Pinky you need to go outside and get some air," her stepfather, Ronney Savoy said.

"'I’m good I’m good, as long as I got WiFi and my Netflix,'" he remembered her saying.

That’s why her parents allowed her to participate in what they thought would be a quiet holiday party, they said she didn't get out much. They said chaperones promised she would be safe and looked after at an Airbnb. It was 9 p.m. when she left for the party.

"She was supposed to have stayed at an Airbnb with a couple more friends from school and the mother they had done this once before, so we were comfortable letting her go a second time," he said.

That is why her loved ones are baffled as to why the Crawford W Long Middle School student was at the hotel and why it led to her death.

"We spoke to the mother and she said she was going to be there," he said.

The girl's parents said there was never an Airbnb.

Her parents didn’t know when they went to sleep around midnight their daughter was taking her last breath.

"You see it and you never think it would hit home. Not Pinky, not pinky," Savoy said.

They said they didn’t know something was wrong until authorities called them at 9 a.m. the next day.

"As a parent, you're supposed to pick up the phone and call that parent," Savoy said.

Atlanta police said she and a teenage boy were the only ones inside the room at the time of the shooting. Investigators said the two were acquaintances and could have gotten into an argument. Her parents said something doesn’t seem right.

"She wasn’t out here in these streets," her stepfather said.

The teen boy was arrested. He is facing a sexual assault charge, felony murder, aggravated assault, reckless conduct, and possession of a pistol by persons under 18 years of age. He was booked into the Metro Youth Detention Center.

Her family said they believe the shooter is not the only one responsible for her life being cut short and investigators should consider additional charges.

Williams' death marks the city of Atlanta’s 153rd homicide this year, and it was the third to take place in less than 24 hours on Saturday, just a day after Christmas.