The family planned a March in response to the findings of a GBI investigation, which found the Cobb County Police Department officer justified in shooting Vincent Truitt in the back as he ran away with a gun in hand.

COBB COUNTY, Ga. - A Georgia Bureau of Investigation probe found a Cobb County Police Department officer was justified in shooting a teenager in the back while he was running away with a gun in his hand.

In response, Vincent Truitt's family has planned a walk for justice in his honor on Saturday afternoon.

Police said Vincent Truitt and two teenagers were allegedly inside a stolen car in July 2020 when officers started chasing them. The incident ultimately ended with an officer shooting Truitt twice in the back when he started running away while armed.

Truitt was taken to Grady Memorial Hospital in Atlanta with critical injuries and later died. No officers were injured. 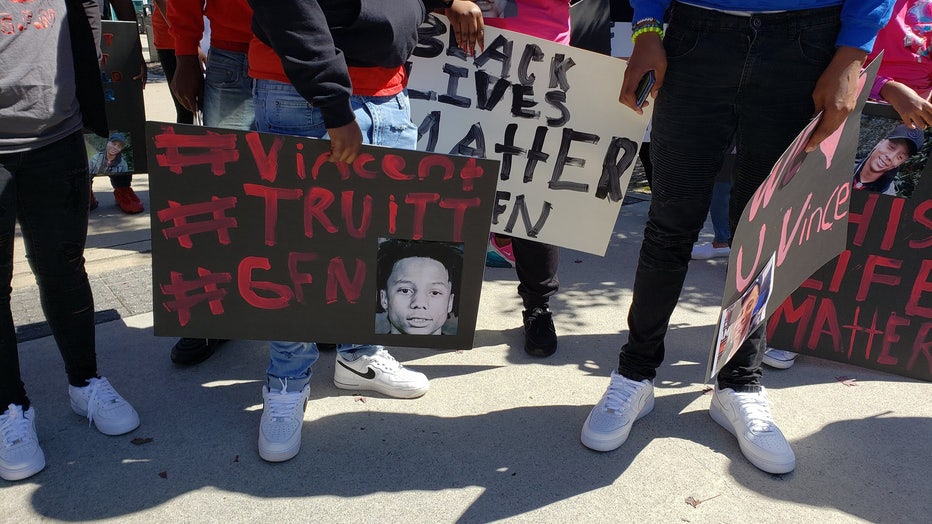 FILE: A protest over the police shooting death of Atlanta teenager Vincent Truitt.

A GBI investigation did not recommend charges against the cop and the district attorney did not pursue a criminal case.

Truitt's family, however, is fighting. They said the GBI's findings are unjust and that Truitt did not pose a threat when he was running away from officers.

They said the district attorney handled the case poorly.

"When a black American, a black person, has a firearm, it does not give law enforcement a blank slate to respond, to shoot and kill as they see fit," Truitt family attorney Maria O. Banjo said.

In February 2021, a Cobb County grand jury ruled that the use of force in the deadly shooting of the 17-year-old was "authorized." Cobb County District Attorney Flynn D. Broady Jr. released surveillance video, dash camera video and body camera video of the incident.

The walk begins at 1 p.m. off of Riverside Parkway in Austell. The family, attorney and students at KIPP Atlanta Collegiate will walk from where he was killed in Austell to his home in southwest Atlanta.

Who was Vincent Truitt?

The 17-year-old's family lived in Atlanta.

Truitt was shot twice in the back on July 13, 2020, after exiting a stolen car following a chase near Austell, about 16 miles west of downtown Atlanta. He was one of three teens inside the vehicle that was spotted by police about 11:20 p.m. that night. He later died at a hospital.

Police have said Truitt had a gun and the cop shot him in seconds after chasing him.

The Cobb County District Attorney’s Office said video and still photographs showed the gun Truitt was holding when he was shot.