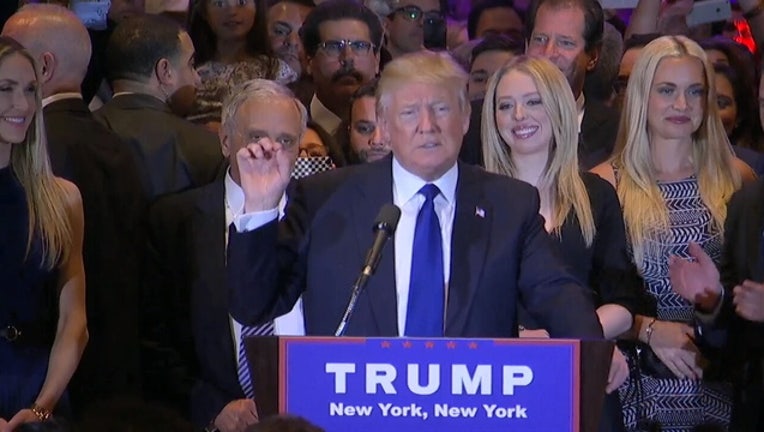 Trump's campaign manager Corey Lewandowski says the campaign's goal is to beat the margins that rivals Ted Cruz and John Kasich achieved in their home states.

Donald Trump, fresh off a commanding victory in the Republican primary in his home state of New York, is suggesting he may soon have the race in hand.

"We don't have much of a race anymore," says Trump, declaring that his campaign is "really rocking" and he could have the nomination sown up before the party convention in Cleveland.

Trump was widely expected to beat his rivals Ted Cruz and John Kasich in Tuesday's election. The precise allocation of delegates from the state won't be determined until the vote results are calculated by congressional district, but Trump is certain to extend his delegate lead and come closer to the 1,237 delegates required to clinch the party's nomination.

Early results of the exit poll in the state show a large majority of New York Republicans want the next president to be a political outsider.

As of Tuesday afternoon, Trump had amassed 756 delegates, while Cruz had 559 and Kasich had 144.

Texas Sen. Ted Cruz is trying to move beyond a crushing defeat in New York, which he is dismissing as merely "a politician winning his home state."

Instead, he is pivoting with a sweeping call to unite the Republican Party by painting himself as the outsider able to capture the imagination of a party searching for leadership.

Already moving on to Pennsylvania, Cruz is saying: "This generation needs to answer a new set of questions. Can we? Should we? Will we?"

Cruz is comparing his candidacy to Ronald Reagan's and John F. Kennedy's, asking the Pennsylvania audience, "Are we still those people, those dreamers and doers?"

The Pennsylvania primary is April 26.

Ohio Gov. John Kasich says he believes the Republican presidential primary will be "deadlocked" and delegates will choose their nominee at the party's convention in July.

Kasich spoke in Annapolis, Maryland, on the evening of the New York primary. Maryland holds its primary next Tuesday.

Kasich is predicting that neither Ted Cruz nor Donald Trump will win enough delegates to clinch the GOP nomination before the convention in Cleveland. He is pitching himself as a candidate with a positive and unifying message.

Donald Trump is again signaling that he plans to challenge the Republican National Committee to change delegate selection rules.

Trump says: "Nobody should take delegates and claim victory unless they get those delegates with voters and voting. And that's what's going to happen."

Republican rival Ted Cruz has won fewer contests and has been allotted fewer delegates, but has outmaneuvered Trump in organizing state-by-state.

The strategy has allowed Cruz to scoop up delegates who could support him if the nomination requires multiple ballots at the national convention.

Trump has called the party's delegate selection plan "rigged." The plan has been public for more than a year and official since October.

The Republican National Committee meets in Florida later this week.