What is a census?

A census is when a government documents information about a particular population.

WASHINGTON - The nation's political center of gravity shifted further to the Republican-led South and West on Monday, with Texas, Florida and other Sun Belt states gaining congressional seats while chillier climes like New York and Ohio lost them.

As the Census Bureau held a live event Monday releasing initial data from the 2020 headcount, it revealed that the US population rose to 331,449,281, marking a 7.4% increase which the bureau said was the second slowest rise ever in the nation’s population.

Last year, the Census Bureau revealed that the U.S. population grew by the smallest rate in at least 120 years from 2019 to 2020. It was a trend that demographers say provided a glimpse of the toll of the ongoing coronavirus pandemic.

The release of the apportionment numbers Monday afternoon comes almost four months later than planned because of delays caused by the coronavirus pandemic, as well as anomalies discovered in the data as the numbers were being crunched.

The numbers are state population counts that show how many residents each state has gained or lost over the past decade.

The 435 seats in the House of Representatives are divided among the states based on population. As growing states get more congressional seats because of population gains, that means fewer seats for states that lost population or didn’t grow as fast.

The number of Electoral College votes each state has is also tied to its census numbers.

The statistical agency’s acting director, Ron Jarmin, will participate in a virtual news conference scheduled for 3 p.m. ET. The results will also be posted on the Census Bureau’s website.

Last week, an agreement settled litigation between the agency and a coalition of local governments and civil rights groups. It requires the bureau to provide regular updates to the civil rights groups and local governments on the quality of the data used for drawing congressional and legislative districts, and it resolves a lawsuit that forced an extension of the nation’s headcount after the former Trump administration tried to cut it short.

"Every person deserves to be counted — and we are gratified to have been a part of this remarkable coalition’s critical fight to secure a fair and accurate census for all," Sadik Huseny and Melissa Sherry, two of the attorneys representing the local governments and civil rights groups, said in a statement. 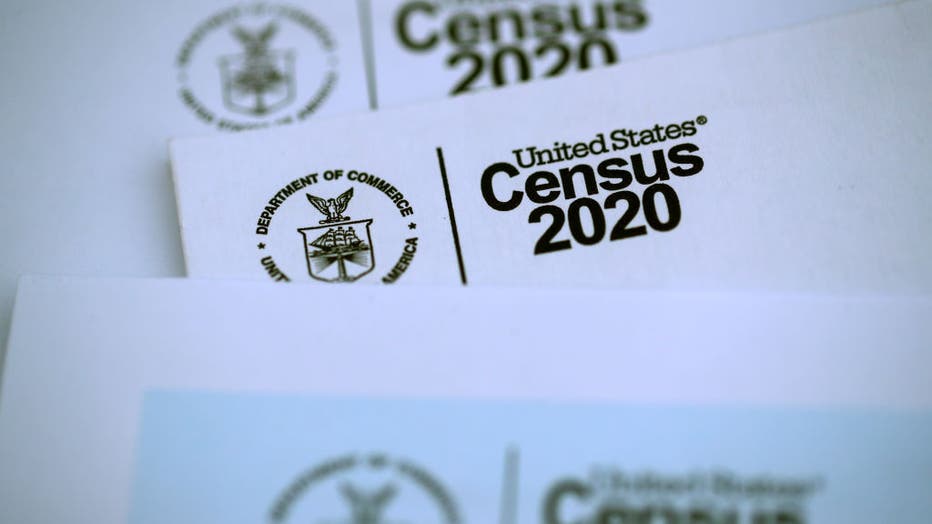 FILE - The U.S. Census logo appears on census materials received in the mail with an invitation to fill out census information online on March 19, 2020 in San Anselmo, California. (Photo Illustration by Justin Sullivan/Getty Images)

The agreement comes three months after President Joe Biden took office and rescinded two directives issued by President Donald Trump that critics said motivated his administration to try to end field operations for the 2020 census a month earlier than planned.

The first Trump directive ordered that people in the country illegally should be excluded from the state population count used for divvying up congressional seats among the states. The second directive ordered the Census Bureau to gather citizenship information about every U.S. resident using administrative records after the Supreme Court nixed the Trump administration's effort to add a citizenship question to the census questionnaire.

In response to Biden's order in January, the Census Bureau discontinued efforts to create citizenship tabulations at the city-block level using 2020 census data in combination with administrative records. The lawsuit settlement says that the Census Bureau recognizes that the citizenship data are incomplete and unfit for use for either divvying up congressional seats among the states or redrawing congressional or legislative districts.

Because of the pandemic, the Census Bureau last year pushed back the deadline for finishing the count from the end of July to the end of October. Then last summer the agency announced that the deadline would be changed to the end of September, cutting off a month, after the Republican-controlled Senate failed to take action on a Census Bureau request for more time to turn in the numbers.

RELATED: Census Bureau to end all counting efforts on Sept. 30, one month earlier than planned

The coalition sued the Commerce Department, which oversees the Census Bureau, claiming the shortened schedule would cause Latinos, Asian Americans and immigrants to be missed in the count. Critics also said the count was shortened, as was the amount of time to process the data, so that then-President Donald Trump would still be in the White House when the apportionment numbers were finished and his directives could be implemented.

A federal judge ruled in favor of the coalition, but on appeal, the Supreme Court allowed the Census Bureau to end the headcount in mid-October.

The Census Bureau missed a Dec. 31 deadline for turning in the apportionment numbers, and it kept pushing back the dates for releasing the numbers after not-unexpected irregularities were found in the data. As government attorneys negotiated toward a settlement with the coalition, the Census Bureau agreed to release the apportionment numbers sometime between mid-April and the end of the month.

The census not only decides how many congressional seats and Electoral College votes each state gets based on population, but it also determines the distribution of $1.5 trillion in federal funding each year.

As part of the agreement, the federal government will pay the defendants $1.65 million for costs and legal fees.

The Associated Press contributed to this story. It was reported from Cincinnati.