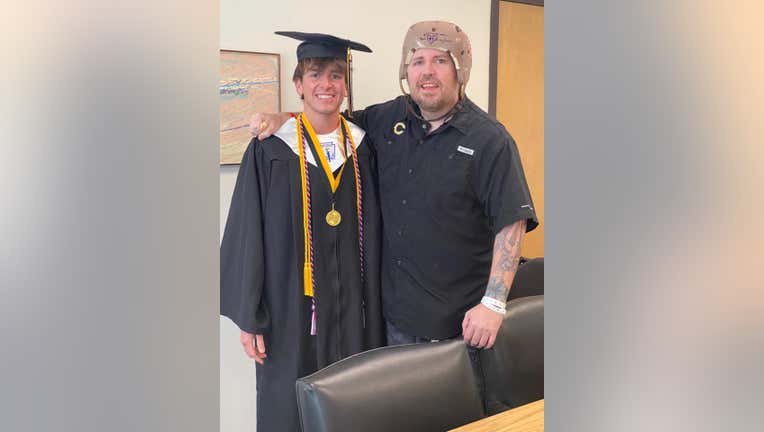 Carrollton Police Officer Sgt. Rob Holloway was reunited with his son, Grady, for the first time since he was shot in April during a high-speed chase in Carroll County. (Photo courtesy of Shepherd Center)

ATLANTA - A Carrollton Police Department officer, who's been recovering at Shepherd Center in Atlanta after he was shot in the head in April, was reunited with his son for the first time since his injury.

On Saturday, Shepherd Center said Sgt. Rob Holloway and his son, Grady, who recently graduated from Carrollton High School and celebrated his 18th birthday, got together for a surprise graduation party at a Shepherd Center conference room.

Shepherd Center said Grady had attended honors night, baccalaureate, celebrated his birthday and high school graduation all without his dad. Holloway and his son haven't been in the same room — as far as the officer remembers — since he was wounded in the line of duty.

"Rob was in therapy, and I went down to meet Grady," Holloway's wife, Stephanie said. "Rob’s nurse and our case manager brought us downstairs, and when they opened the door, the first thing he saw was Grady in his full graduation gown, honors medallion, honors cords, dual enrollment cords and National Honor Society stole. It was a very emotional time for us all. They are very close and Robbie is a wonderful father, so in addition to just recovering from the gunshot wound, missing all of these important milestones for Grady has been very difficult on all of us. Rob was able to stand from his wheelchair, and they embraced in the first good hug since Rob has been hurt. We were all crying happy tears."

Grady plans to attend the University of North Georgia this fall.

Holloway has been in Shepherd Center’s Brain Injury Rehabilitation Program since transferring from Grady Memorial Hospital. Doctors are optimistic that he will be able to walk, talk and move as he did before after completing rehabilitation.

Holloway was one of three officers from three different agencies injured in the violent April 12 police chase.

Court documents said Shelton was driving the car, as his cousin, Pier Shelton, 28, shot an AK-47 at officers in pursuit.