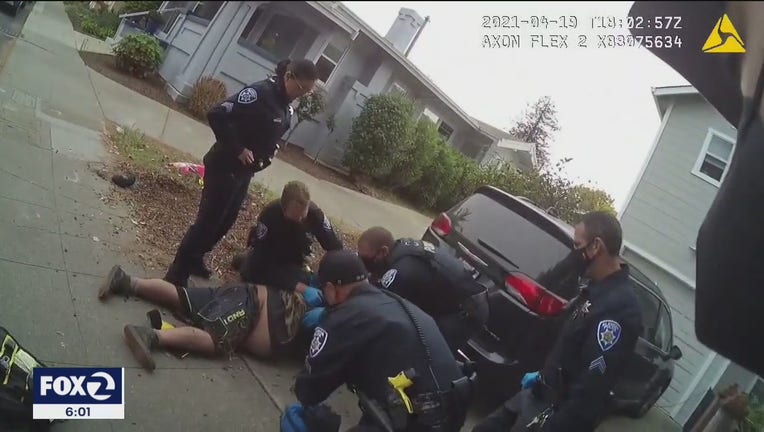 Alameda police officers try to revive Mario Gonzalez of Oakland after police restrained him, prone on the ground. April 19, 2021

SACRAMENTO, Calif. - California would bar police from using certain face-down holds that have led to multiple unintended deaths under a measure headed to Gov. Gavin Newsom on Thursday.

The bill expands on the state’s ban on chokeholds in the wake of George Floyd’s murder by a Minneapolis policeman. The Assembly gave final approval on a 50-15 vote.

The measure by Democratic Assemblyman Mike Gipson, a former police officer himself, would prohibit police from using techniques that create a substantial risk of what’s known as "positional asphyxia."

They include putting suspects face down, then pressing down on their backs with hands, elbows or knees to gain control.

It defines the hold as placing a person in a way that compresses their airway and reduces their ability to breathe. That includes putting body weight on a restrained person’s neck, torso, or back.

MORE: Who was Mario Gonzalez? Man who died in police custody had lost job during pandemic

The California State Sheriffs’ Association said the bill is too broad "and neglects situations in which a subject creates a threat of death or serious bodily injury to an officer or another person." Barring the holds by trained officers makes it more likely they will have to use alternatives like batons or Tasers, the association said.

Nevada enacted a similar ban last year as part of broader legislation, according to the National Conference of State Legislatures.

Many law enforcement agencies already restrict the practice. Police manuals warn that restraining someone face down for an extended period can lead to injuries or death.

He was pinned down by four Alameda Police Department employees for more than five minutes before he died.

About the same time, a jury in Southern California awarded more than $2 million to the family of a homeless man who died in 2018 after officers in Anaheim used a similar technique to restrain him.