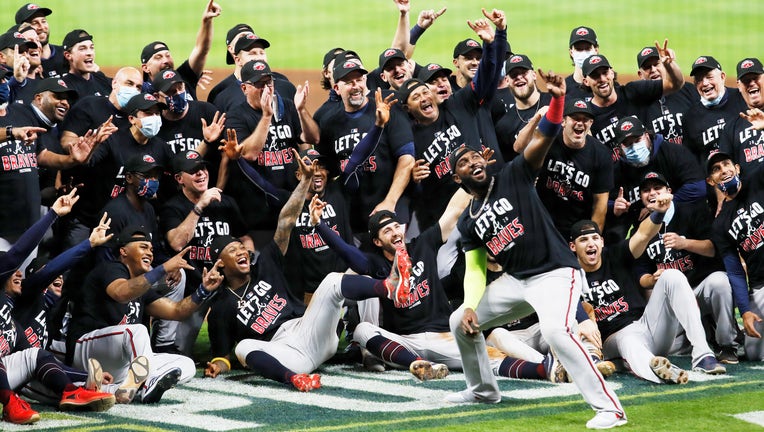 Marcell Ozuna #20 of the Atlanta Braves and teammates celebrate their 7 to 0 win over the Miami Marlins in Game Three of the National League Division Series at Minute Maid Park on October 08, 2020 in Houston, Texas. (Photo by Bob Levey/Getty Images)

HOUSTON - Rookie Kyle Wright dazzled for six innings in his postseason debut, and the Atlanta Braves rode their superb pitching to beat the Miami Marlins 7-0 Thursday for a three-game sweep and their first trip to the NL Championship Series since 2001.

Atlanta had lost eight straight Division Series, including in each of the previous two seasons, before outscoríng the Marlins 18-5, including 11-0 in the final two games. The Braves are 5-0 with a 0.92 ERA in the postseason, allowing five runs in 49 innings.

There were only a few scattered cheers as the Braves wrapped up the series in an almost empty Minute Maid Park, where the only fans allowed were players’ friends and families. 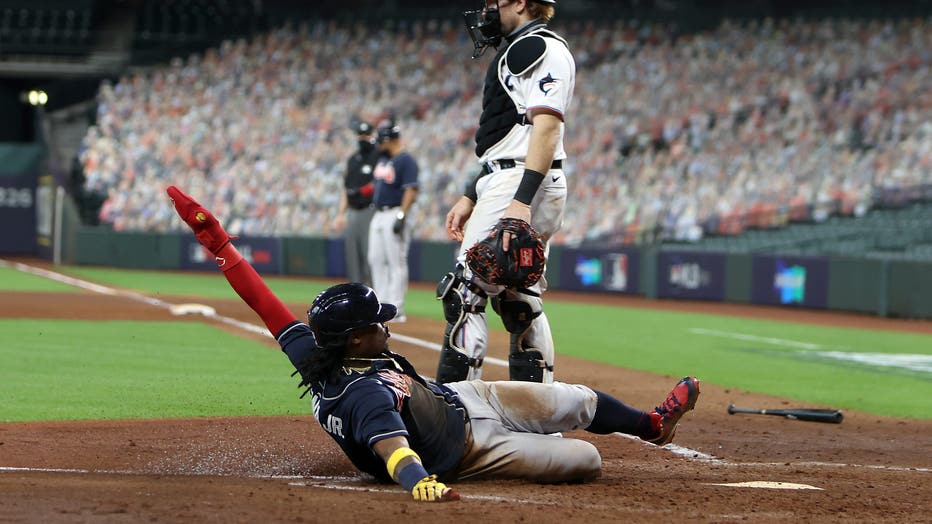 Ronald Acuna Jr. #13 of the Atlanta Braves slides home to score in the top of the fourth inning of Game 3 of the NLDS between the Atlanta Braves and the Miami Marlins at Minute Maid Park on Thursday, October 8, 2020 in Houston, Texas. (Photo by Micha

They will play the Los Angeles Dodgers or San Diego in the NLCS starting Monday in Arlington, Texas. They had not advanced to the NLCS since they were led by Chipper Jones, Greg Maddux, Tom Glavine and John Smoltz, a team managed by Bobby Cox.

Wright (1-0) was sharp despite not pitching since Sept. 25, allowing three hits and walking two with a career-high seven strikeouts. A.J. Minter, Jacob Webb and Shane Greene finished the five-hitter to give the Braves four shutouts in five playoff games.

Travis d’Arnaud doubled twice, with the first one driving in two runs in Atlanta’s big third inning. The veteran catcher, who bounced around three teams in a tough 2019, helped steady Atlanta’s young starters, was 6 for 10 with three doubles, two home runs and seven RBIs in the sweep.

Atlanta Braves advance to the NLCS

For the first time since 2001, the Braves are headed to the NL Championship Series, after winning Game 3 of the NLDS against the Marlins.

The Marlins, who lost 105 games last season, were the feel-good story of this postseason after overcoming a coronavirus outbreak to reach the postseason for the first time since 2003. With a front office led by Derek Jeter and and a dugout headed by manager Don Mattingly, they entered confident after sweeping the Chicago Cubs in the wild-card round. But the young team was overwhelmed and lost a playoff series for the first time after entering 7-0 with titles in 1997 and 2003.

Rookie Sixto Sánchez (0-1) walked Ronald Acuña Jr. to start the third, and Acuña stole second before advancing to third on a single by Freddie Freeman. Marcell Ozuna laced a single that scored Acuña.

D’Arnaud knocked a double off the bullpen in right-center to send two home and extend the lead to 3-0. The Braves tacked on another run on a sacrifice fly by Dansby Swanson. 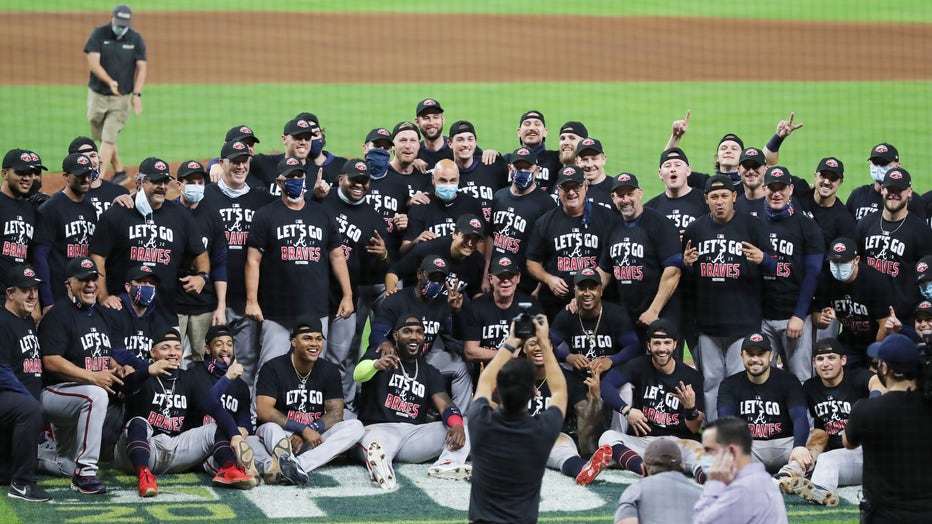 The Atlanta Braves celebrate their 7 to 0 win over the Miami Marlins in Game Three of the National League Division Series at Minute Maid Park on October 08, 2020 in Houston, Texas. (Photo by Elsa/Getty Images)

Sánchez, who threw five scoreless frames in Game 2 of the wild card, was done after that inning, allowing four hits and runs with three walks as he tied his shortest outing of the season.

The Marlins had a chance to cut into the lead in the bottom of the inning when they loaded the bases with two outs. But Jazz Chisholm grounded out to end the threat.

It was a theme throughout the day for Miami, which went 0 for 9 with runners in scoring position.

Atlanta added a run in the fourth when Acuña scored from first after centerfielder Magneuris Sierra committed an error on a single by Freeman.

The Braves continued to pour it on in the fifth when Swanson had an RBI single and Adam Duvall sent him home with a double to make it 7-0.

Atlanta’s win overshadowed a terrific catch by Corey Dickerson in the second that helped Sánchez escape a bases-loaded with no outs jam. Sánchez struck out Adam Duvall for the first out before Dickerson dived to catch a ball hit by Nick Markakis just before it hit the grass that likely saved multiple runs from scoring.

Dickerson’s catch came a day after Markakis made a perfect throw to pick Dickerson off at second in the eighth inning of Game 2.