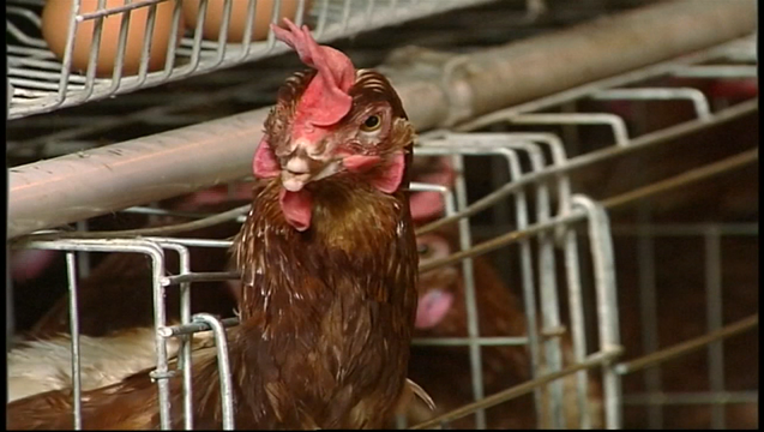 MINNEAPOLIS (AP) - The detection of a highly pathogenic strain of bird flu at a Tennessee chicken farm has poultry farmers stepping up security in an attempt to prevent an outbreak like the one in 2015 that required the destruction of millions of chickens and turkeys in the Midwest. The appearance of milder forms of bird flu at a Wisconsin turkey farm and another Tennessee chicken farm has heightened concern.

Here are some things to know about the state of avian influenza in the U.S. and worldwide, and how the poultry industry has tried to prepare for a recurrence:

The U.S. Department of Agriculture announced Sunday that a highly pathogenic form of bird flu was confirmed Saturday in a flock of 73,500 breeding broiler chickens in Lincoln County, Tennessee, after hundreds of birds began dying. It was identified as an H7N9 virus of North American wild bird origin. The USDA stressed that it was not the same H7N9 virus of Chinese lineage that has sickened poultry and people in Asia, nor is it related to the virus that caused the 2015 U.S. outbreak.

The USDA also said a flock of 84,000 turkeys at a Jennie-O Turkey Store farm near Barron, Wisconsin, had been confirmed with a low pathogenic H5N2 virus. The USDA stressed it was different from the highly pathogenic H5N2 virus that devastated the Midwest chicken egg and turkey industry in 2015.

On Thursday, the Tennessee Department of Agriculture reported a case of low pathogenic H7N9 at a different chicken breeding farm operated by an unspecified different company, in Giles County. Officials said they didn't think one farm sickened the other. The birds in the affected flock were killed.

The USDA calls the 2015 outbreak the largest animal health emergency in U.S. history. It cost farmers nearly 50 million birds before it burned out in June 2015. Iowa, the country's top egg producer, and Minnesota, the No. 1 turkey producer, were by far the hardest hit.

An outbreak of H7N8 in Dubois County, Indiana, in January 2016 remained isolated to 10 farms, but more than 414,000 turkeys and chickens died. Most of those farms had a low pathogenic version, but the USDA said it apparently mutated into highly pathogenic at one farm.

While response plans differ from state to state, a common and effective approach is "controlled marketing." Infected flocks are not euthanized but are kept quarantined until they recover and test negative for the virus, and then they can be marketed, Cardona said.

That's what's being done in Wisconsin, according to the USDA.

U.S. producers have stepped up biosecurity in response to the new cases, as well the ongoing outbreaks in Asia, Europe and Africa that have led to the destruction of hundreds of millions of birds and killed dozens of humans. Bird flu viruses don't usually spread to people except by close contact with infected birds, but health authorities are always alert to the possibility.

Since wild waterfowl are considered the main reservoirs of bird flu, farmers and scientists get nervous when birds are migrating. Droppings from infected birds flying north in the spring, or south in the fall, can get tracked into barns or carried in on contaminated equipment. So producers are being more vigilant about keeping people and vehicles from entering their farms unless they absolutely need to be there.

"They understand this is a high-risk period with the spring migration period, so they're watching their flocks closely and doing additional surveillance to make sure that if anything pops up, they're going to identify it quickly," said Dr. Shauna Voss, senior veterinarian at the Minnesota Poultry Testing Laboratory in Willmar.

Since 2015, many farmers have built the "Danish entry" system into their barns, said Steve Olson, executive director of the Minnesota Turkey Growers Association. Anyone entering or leaving has to sit on a bench, take their boots off, swing their legs around to the "clean" side of the room, put on new boots and clothing that stay in the barn, and reverse the process when they leave.

Bird flu viruses keep evolving, like human influenza viruses, so a vaccine that works against one strain might be ineffective against another. While an H5N2 vaccine was developed in 2015, it was never deployed in the field. Producers are wary of vaccines because many countries refuse poultry products from countries that use vaccines. That is because tests for the disease look for the same antibodies that vaccines trigger an animal to produce.