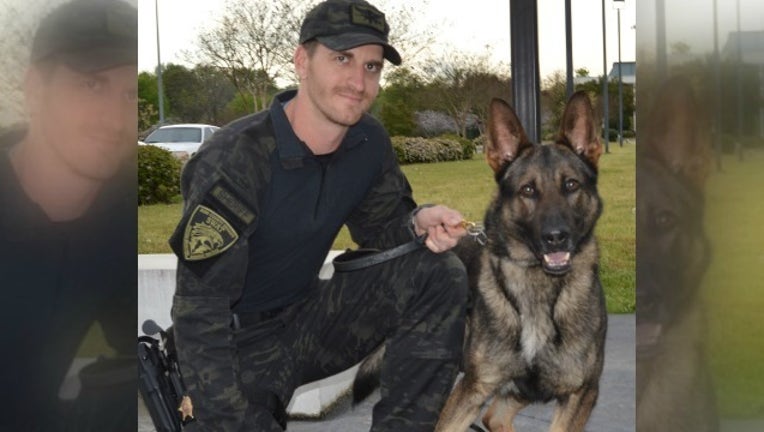 MACON, Ga. - Thousands of people filled the Macon Centreplex on Monday to pay their final respects to fallen deputy.

Investigator Anthony Joseph “TJ” Freeman was responding to assist in a suspicious vehicle stop when his car went off the road and ended up in the front yard of a home last week.

The 29-year-old deputy left behind his wife, Jessica, and their two children, 11-year-old Braden and 5-year-old Blaiklyn.

“He loved his family, he loved his kids, and he loved Jessica. And they had just the best relationship that a husband and wife could have,” said Lindsey.

His wife, Jessica, said he was an incredibly loving father and husband. Before he was killed in the line of duty, he was talking about his kids.

“The guys on his unit the night it happened said the only thing he said was ‘I can come in at 12, but I have to be off by 7 because I have to go get my babies to school. I can be back after, but I have to get them to school,’” Jessica Freeman recalled.

Jessica said she and TJ were incapable of being separated.

"We played video games together and we didn't play them without each other. Like we had games we were playing and we were the same level because we only played them together. We watched movies together and I know all people do that but we were never apart,” said Jessica Freeman.

But she said he was a true kid at heart.

“I would like to call him a child, but I don't know if he ever got that far, he was never going to grow up and that was the best thing about him,” said Jessica Freeman.

His mother recalled when he first joined the force how she would worry about him.

“He said, ‘Mom, I've decided what I'm gonna do. I'm gonna join the police department.’ And I said ‘No, that is not an option.’ He said ‘It's too late I've already filled out and going in for my interview,” said Lindsey. “He was not one to follow. He had to be in the front because him, the bigger the better. And he had to be the one leading it.”

TJ’s widow recalls how she just could not stop him from doing what he loved.

“How do you tell somebody what they want to do is not ok? That's who they are. So yeah it sucks and it sucks worse now, but he was happy with his life and his family and his job so that's ok,” said Jessica Freeman.

Despite the grief, his family said they have hope.

"I am completely reassured he is in a much better place than he left and if you knew him not only is he in a better place, but he went out in a car chase, he is now famous and he is excited about it, trust me,” said Jessica Freeman.

Law enforcement from all over the county was at the service Monday.

Jessica said anyone who feels they need to help or do something for the family can make a donation to the Macon Shriners. She was TJ was a Shriner and that's what he would've wanted.