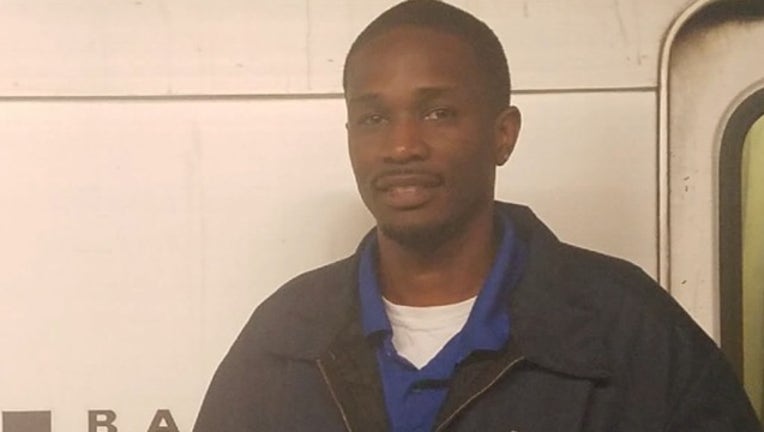 Vincent Seal, who cleans BART trains for a living, performed CPR on a passenger, saving his life on Monday. Photo courtesy BART.

PLEASANTON, Calif. (KTVU) - He wasn't even supposed to be there, but now he's a hero. Vincent Seals cleans BART train cars for a living. Normally he works out of the Millbrae Station, but Monday night he picked up a shift at the Dublin/Pleasanton Station and ended up saving a young man's life.

"That night was crazy because it was actually my day off," Seals told KTVU. Seals only began working for the transit agency in January. He was with family, but took the overtime and came to find out a "life-changing event" would happen.

Seals heard a co-worker calling for help at the station's platform. When he arrived, he found a passenger slumped over in a seat, eyes rolled in the back of his head. He put his ear to the unconscious passenger's nose and mouth to check for breathing. He couldn't hear anything and the man's lips had already turned blue.

"I just went right into action."

Seals picked up the passenger and laid him out on the floor. He estimated his age to be around 19 to 22. It turns out the passenger had just turned 20 the day before this encounter.

It should have been a normal day, relatively speaking for BART, but Seals said it was, "one of the craziest things" he'd encountered, "to actually see somebody's child lifeless."

"I was in shock. I was surprised."

Fortunately his training in CPR from a previous warehouse job would have its day of reckoning. Seals had never actually had to perform the life-saving maneuver before.

BART spokeswoman Anna Duckworth told us, while CPR training is not required of BART employees, there is a mandate for all BART police officers to be trained.

"I was just happy I was able to remember everything that I had learned in my CPR class and I didn’t freeze," Seals said.

A BART police officer did arrive while he was giving chest compressions to the passenger.

The officer was of assistance, however. She tried using 'smelling salts' and used a CPR mask to administer rescue breaths.

The passenger gained consciousness twice during the ordeal. By the time paramedics arrived, he was conscious, breathing and was taken to the hospital.

"I’m not the hero, he’s the hero," Seals said. "He stopped breathing a few times. He was determined. He was fighting."

When it was over, the BART worker said he was exhausted, sweating and shaking. Co-workers tried to get him to relax.

"I sat down and tried to get my breathing under control. Later, I did go home and try to process and take everything in."

Since his heroic action, which he doesn't really consider heroic, Seals said his employers have thanked him and told him "good job, thanks for being there" and "thanks for getting involved." He's happy to continue working for BART, cleaning trains at the end of the line.

Seals believes it was fate that he was there that day.