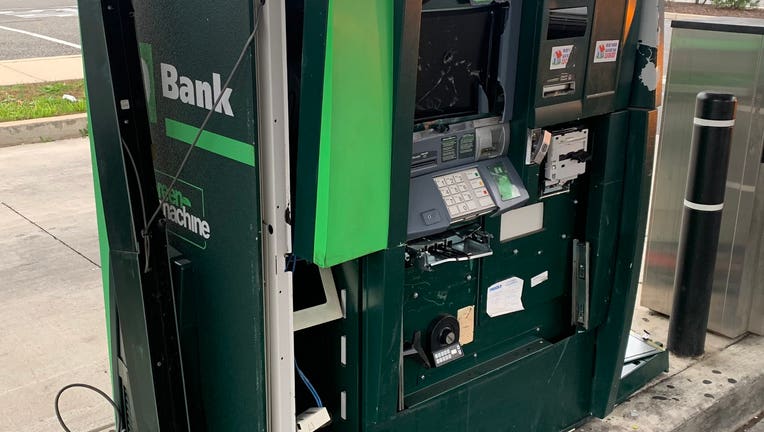 While no money was stolen from the TD Bank ATM, the vandals managed to gain access to deposited checks.

Officers responded to four reports of ATM explosions in North Philadelphia between 9:30 p.m. Tuesday and 5 a.m. Wednesday. Police say the suspects were unable to breach the cashbox and steal money, but significant damage was done to the machines.

Philadelphia Bomb Squad responded to its first report of an ATM explosion around 9:30 p.m. in Strawberry Mansion. Investigators said a group of unknown men set off an explosive device inside the Ridge Avenue Restaurant and fled.

TD Bank among businesses struck by rioters in Port Richmond

FOX 29's Steve Keeley is at TD Bank in Port Richmond where looters were unable to steal money, but caused plenty of damage.

Officials in North Philadelphia reported between 5-6 men detonated an explosive device inside Lee's Kitchen around 1 a.m. Authorities also responded to ATM explosions at a gas station on 2800 North Broad Street and a deli on the 3500 block of Germantown Avenue during the early morning hours.

Officers in Mayfair said an ATM was blown up inside Greenman's Deli on the 2900 block of Robbins Street. No money was taken, but the machine's screen was destroyed. Similar explosions occurred at a Wawa in Cresentville and a Sunoco Gas Station in East Falls.

FOX 29's Steve Keeley was at the TD Bank in Port Richmond on Wednesday morning where an ATM was torn into by rioters. It's unclear if an explosive device was used to crack the machine. Armored truck workers told Keeley that while no money was taken, the thieves managed to access the check deposit section of the machine.

'Justice should be served’: Family of Walter Wallace Jr. calls for justice and peace in wake of fatal shooting