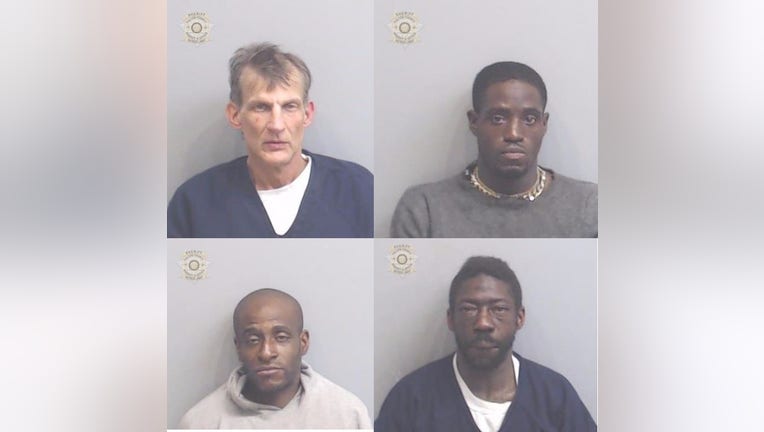 Officials say between Feb. 1 and Feb. 4, officers arrested four men involved in property crimes around the city. After the arrests, officers say they noticed that all four were repeat offenders.

On Feb. 1, officers arrested Stephen Fortner after being called to the 1100 block of Murphy Avenue by security who heard voices and the sound of drilling. Fortner and his suspected accomplices were found with tools and copper wiring. He was charged with second-degree burglary, theft by taking, and possession of tools during the commission of a crime.

Jeremy Taylor was charged with second-degree burglary on Feb. 2 when officers received a call from a hotel on the 500 block of Pharr Road about a man trying to break into the bar's cash register. Police say security footage showed him entering the staff-only doors and trying to use a set of keys to open the register before stealing a can of beer.

Anthony Burgess was arrested on Feb. 3 by officers who say he matched the description of a peeping Tom seen in the area. Officials say Burgess has over 50 previous arrests.

On Feb. 4, police say Monte McCord was apprehended on the 1600 block of Lakewood Avenue and charged with first-degree burglary, theft by taking, and possession of a schedule II controlled substance.

In total, the four suspects had 155 prior arrests and 30 prior felony convictions.

"No matter our tenacity and/or our success in making these arrests, we are clear that we cannot arrest our way out of this dilemma. Police alone cannot fix the repeat offender or crime problem. We arrest them, and we will take them to jail, but that isn’t enough," the Atlanta Police Department wrote on Facebook. "The entire criminal justice system and the community must work together for change to occur. If not, the revolving door will continue to rotate and the daily scene, which oftentimes looks and feels like ‘GroundHog Day’ (the movie), will continue in perpetuity."

Despite the repeat offenses, officials with the department say they will continue to focus on their mission to make and keep Atlanta safe.