For nearly four decades, Tony Carter has been buried without a headstone. The 9-year-old was one of the nearly 30 known victims of the Atlanta child murders.

HOGANVILLE, Ga. - A victim of the Atlanta child murders who is buried in Hogansville is finally getting a headstone.

Anthony "Tony" Bernard Carter was 9 years old when he went missing and was later found murdered.

VICTIM OF ATLANTA CHILD MURDERS TO RECEIVE HEADSTONE AT MEMORIAL

"I was the last one to see my cousin go behind a building and never return again," Edwards said.

He had recently moved to Atlanta from Hogansville. 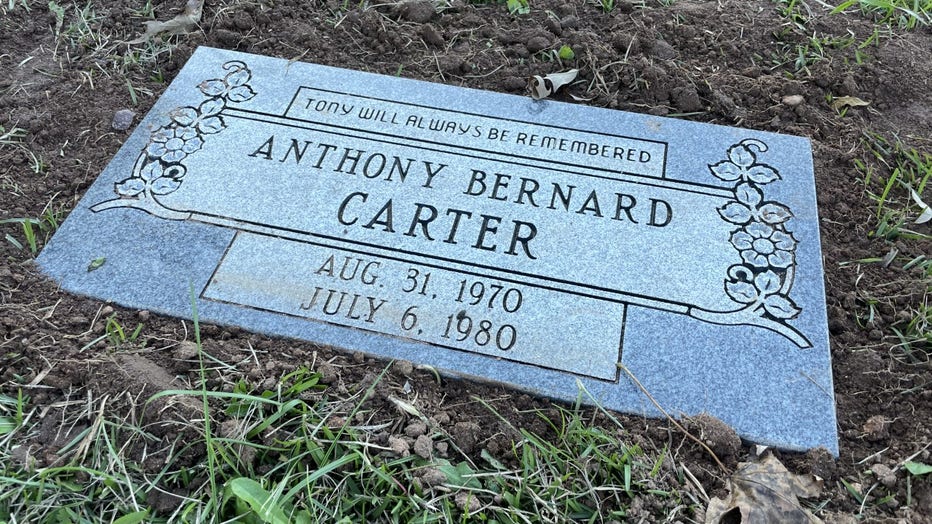 His family said the 9-year-old never met a stranger and was undoubtedly on his way to big things.

"Golden smile, very smart," said Nicholas Burston, a cousin. "He was nine years old, I was about 16. He was a ball of fire. He wasn't afraid of anything," said Thomas Martin, another cousin of Tony's.

After his murder, Tony was brought back home to Hogansville and laid to rest in the Westview Cemetery.

Unfortunately, without a headstone, the family doesn't know exactly where he was buried.

But more than 40 years later- Tony's name will finally have a spot among the others.

Sunshine Lewis, who has advocated for the victims and the families of the missing and murdered children, William G. Murray and Son Funeral home, along with Megan VandeBogert, Jason Winter, and Amie Ray Davis, helped to make it happen.

"It gives Tony back the love, his dignity, and respect to have a name actually placed on his grave," Lewis said.

It's an act of kindness that helps Burston and Tony's other cousins take another step toward healing.

Which is something they said has been difficult to do over the last four decades.

"We walk this street every day on our three-mile walk. Now when we stop here and look, we'll see him," Burston said. "He came back to Hogansville. But closure? No, there's still pain and heartache. Soon, I hope there will be closure."

Burston said he's glad the DNA evidence from the cases are being examined in a private lab in Utah.

The official memorial service for Tony will be Sunday at 3 pm.. at the Springfield Baptist Church in Hogansville.

The public is invited to join the family as they remember the life of Tony.