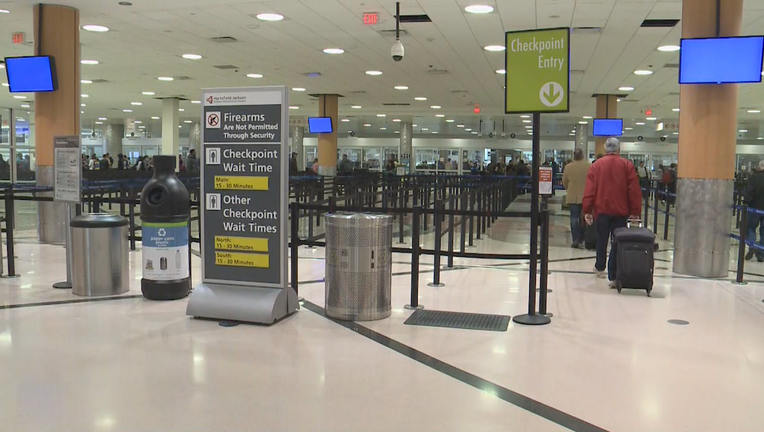 ATLANTA - Despite the COVID-19 pandemic slowing down air travel, Atlanta's airport once again topped the list for most firearms found at airport security checkpoints last year.

"While the overall numbers are down, the rate at which they were found per passenger doubled," said Mark Howell of TSA Public Affairs.

"It does surprise me that with travel being down there would be an uptick in anything," said traveler Cody Appling.

"I’m kind of surprised but I guess the way the world is going on right now, everything is a little crazy," said traveler Michael Blinne.

Firearms saw a spike, adjusted for lower traffic, in the number of guns found by TSA agents at the security checkpoints at Atlanta's airport.

Officials with the Transportation Security Administration said 220 firearms were found at Hartsfield-Jackson Atlanta International Airport in 2020. While that was a reduction from the airport's record-setting number of 320 firearms found in 2019, the reduction of air traffic accounted for the decrease, officials said.

"If you were to mistakenly bring a firearm to a checkpoint, not only could you be cited or arrested by local law enforcement but you are also going to get a civil penalty from TSA of upwards of $10,000," said Howell.

"In 2020, we had a lot less business travel and a lot more people taking advantage of lower rates," said Howell. "So there were more inexperienced travelers."

According to the TSA, officers detected twice as many firearms per million passengers screened compared to 2019 - which makes it the highest rate since the agency's inception.

In total, officers found a total of 3,257 firearms either on travelers or in carry-on bags at security checkpoints at 234 airports nationwide.

"I commend our officers for their commitment to TSA’s security mission by identifying and stopping these weapons at the TSA checkpoints. Firearms are strictly prohibited onboard planes in the passenger cabin," Senior Official Performing the Duties of TSA Administrator Darby LaJoye said in a release. "Bringing a firearm to a TSA security checkpoint poses a serious risk to TSA officer and passenger safety, and doing so may result in significant fines or arrest."

Officials say passengers can fly with firearms in their check baggage so long as firearms are properly stored unloaded in a locked, hard-sided case and declared at check-in - though laws about possession of firearms vary in different areas.

"I always think about what is in my bag before I go," said Blinne.

"It’s definitely good that they are finding them," said Appling. "It would be alarming if they weren’t."

Officials are reminding travelers that inexperience is not an excuse so make sure to check luggage before going through security.