A 24-year-old man was forced to undergo a risky lung transplant after spending months in the ICU having contracted COVID-19. His message to other young people who may not take the virus seriously

ATLANTA - The early April night Blake Bargatze believes he contracted COVID-19, he captured video on his cellphone as he and some friends listened to live music in a West Palm Beach club.

Three and half months later, Blake's mother Cheryl Nuclo is recording another video, this one of her son in an ICU bed at the University of Maryland Medical Center.

It has been eight days since Blake underwent a double lung transplant. 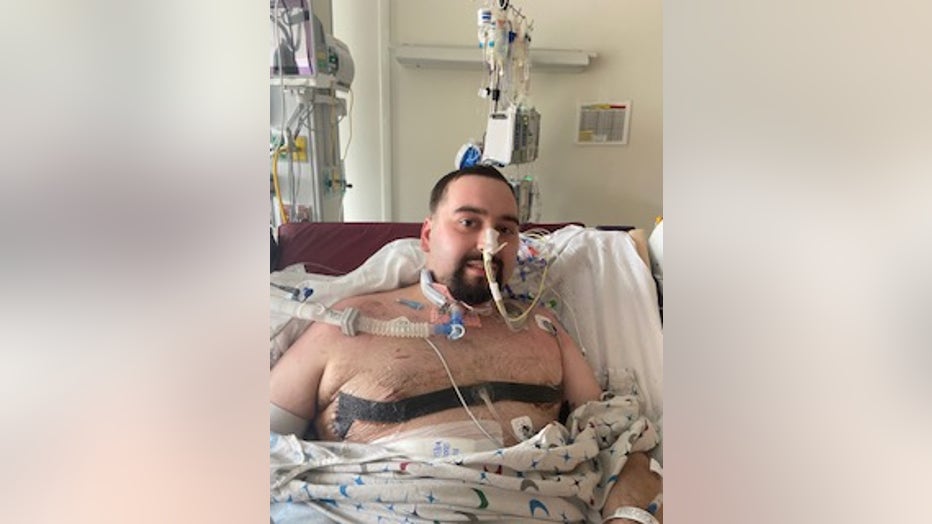 The 24-year-old is the fourth person to complete a double lung transplant at the hospital after COVID-19 destroyed his lungs.

Bargatze is still early on in his recovery, but his mother is hopeful.

Before his ordeal, his mother says, Bargatze was healthy with no underlying medical issues.

He did vape, she says, which the family now believes may have damaged his lungs and made it harder for him to fight off the coronavirus.

Nuclo, an anesthetist at an Atlanta hospital, says her son was the only one in the family who passed on getting vaccinated, saying he would wait and see what happened with the virus.

"But, the night before he was intubated, he wanted it," Nuclo says. "So, it was a little bit too late then."

Within days of attending the show, Bargatze, struggling to breathe, was placed on a ventilator in a south Florida ICU.

Nuclo, who flew down from Atlanta to be with her son, says he seemed to be getting sicker by the day.

Doctors at the hospital wanted to place Bargatze on a type of life support machine known as ECMO circuit.

When they could not one in Florida, Nuclo started working the phones.

That is when Piedmont Healthcare's Director of ECMO, Dr. Peter Barrett, agreed to fly down to West Palm Beach from Atlanta to place Bargatze on the circuit.

By that point, Barrett says, Bargatze was very ill.

"The medical personnel at the hospital were having difficulty because his lungs were already failing," he says.  "They were having trouble ventilating him and oxygenating him.  So, he was in rough shape."

Since the beginning of the pandemic, Dr. Barrett and his team have been traveling across Georgia, placing critically ill COVID-19 patients on ECMO circuits and bringing them back to his Atlanta hospital, where they can receive highly specialized care.

This was the first time Barrett had flown out of state for a patient.

ECMO, Dr. Barrett says, clears carbon dioxide waste from the blood and supplies oxygen to the bloodstream, but it cannot cure the underlying virus.

The hope, he says, is to give the lungs a break while the body tries to fight off the infection.

Once Barrett and his team placed Bargatze on ECMO, he was airlifted to Piedmont Hospital in Atlanta.

By then, Barrett says, the virus had severely damaged his lungs.

"We had him for, my recollection is, 48 days," Dr. Barrett says.  "It became clear that his lungs weren't going to recover."

That is when Dr. Barrett broke the news to Bargatze's mother his only hope of recovery would be a high-risk lung transplant.

"I was, like, 'No, no," Nuclo remembers. "Because I know it's probably the hardest transplant to go through, and the longevity is not good.  But, then there are some people that have lived many years.

Bargatze agreed to push forward with the surgery, hoping he would one day be able to return to his job and life in Florida.

Dr. Barrett says finding a medical center willing to do the transplant, and then getting Bargatze there, required an ultimate team effort.

"We reached out to many lung transplant programs, and multiple programs did decline him," he says.  "But, we persisted and got him up to the University of Maryland."

Just over a week later, still on a ventilator and unable to speak, he wants to talk.

"He's saying he wants more people to get the vaccine because he doesn't want them to go through what he's gone through," Nuclo says, reading her son's lips.

Blake Bargatze is facing a long road back.

He has not walked in more than 3 months and cannot really move his feet or raise his arms.

"He's going to be in a lot of therapy for a while, but he's doing very well," his mother says. "But, it's hard, it's horrible."

Nuclo says she hopes her son's ordeal will serve as a wake-up call for young people.

"We wanted his story to be out there because we wanted people to be aware," she says.  "Blake isn't the only 24-year-old this has happened to, or younger people.  Like I said, COVID is real.  It's not gone.  People need to be aware and be careful.  And, not to say that you can't get COVID after a vaccination, but I sure don't think you'll be in the same situation Blake is in right now. "

Bargatze and Nuclo says they are grateful to the family of his lung donor.

"It's such a selfless act that somebody has done, and it has allowed us to still have our child," Nuclo says.

Friends have set up a GoFundMe fundraiser for Blake Bargatze and his family at https://gofund.me/8993c012