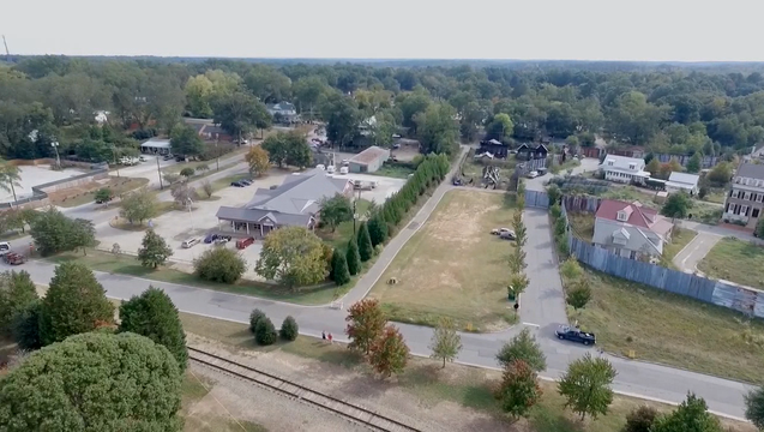 10 things you might find surprising about "The Walking Dead":

1. Raleigh Studios in Senoia, where most of "The Walking Dead" is filmed, is a 140-acre spread that is used exclusively by the show. Most of the different communities are all created and filmed on the property except for The Kingdom, which is filmed at the former Fort McPherson military base in Atlanta, where Tyler Perry has studio space. Another community - The Oceanside - spent some time filming on Tybee Island, on the coast of Georgia.

2. The fictional town of Alexandria, a gated community supposedly set outside of Washington, D.C., is a real neighborhood in Senoia. Just four families live there, while the rest of the homes are vacant and used as mini sets where some of the characters live. The real-life residents have signed non-disclosure agreements and have restrictions on when they can come and go and when they can have visitors so it's not disruptive to filming.

3. The actors who play zombies on the show use conditioner and KY Jelly to give their hair an unwashed, disheveled appearance.

4. The production meeting room is a small theater with a conference table at the front. The room's walls are lined with photos of each of the actors whose characters have died. "Our Grateful Dead" now occupies two walls. Whenever one of the characters dies, the actors - whether they're in the scene or not - make a point of watching it, paying tribute to yet another fallen comrade.

5. The Heaps - a giant mountain of trash ruled over by Polly Macintosh's character Jadis - took three weeks to create. None of the cars that are embedded into the mound are newer than 2010, the year the world "died."

6. The location where Gabriel's church stood is now an empty dirt and wooded lot and served as the same set where the final episode of Season 6 filmed Glenn and Abraham's demise. It is, says Executive Producer Tom Luse, considered "pretty much hallowed ground."

7. The show's props crew is creating a line of kid-friendly toys for a show noted for its violence and gruesomeness.

8. The actors often produce a version of some scenes in which they make liberal use of the F-word. The cleaned up version is aired on TV, while the other version is used for DVD versions that aren't as hamstrung by restrictions on foul language.

9. Actor Norman Reedus is so close with Greg Nicotero, a special effects master as well as the show's producer and sometime director, that they are able to finish each other's sentences. The two also send each other songs to explain the emotion they want to bring to a scene. Before Daryl and Beth, two characters, burned down an old shack, Reedus sent Nicotero "Very Nervous and Love" by J Mascis. Ahead of Daryl having to stab his brother Merle, who had turned into a zombie, Nicotero sent a Willie Nelson song. Nicotero and Reedus even opened a restaurant in Senoia together: Nic & Normans, with the logo including an artist's brush and an arrow.

10. Chandler Riggs, who plays Carl, the son of sheriff Rick Grimes, is an Atlanta native and has grown up on the set. He's now headed to college: the University of Georgia.