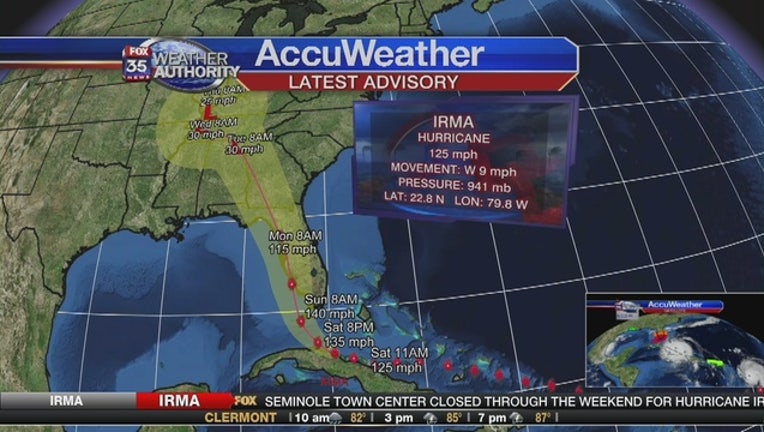 MIAMI (AP) - MIAMI (AP) -- Dozens of personnel from the Environmental Protection Agency worked to secure some of the nation's most contaminated toxic waste sites as Hurricane Irma bore down on Florida.

The Associated Press surveyed six of the 54 Superfund sites in Florida before Irma's arrival, all around Miami in low-lying, flood-prone areas.

There was no apparent work going on at the sites AP visited this past week. The EPA said that if there was no activity, a site should be considered secured but would be closely monitored.

The sites were in various stages of federally directed, long-term cleanup efforts. At the Miami-Dade Emergency Operations Center on Saturday, Republican Sen. Marco Rubio said the EPA workers he's spoken with seem "generally positive" about the prospects for toxic sites remaining secure in the coming hurricane.

But "they can't guarantee it 100 percent," he told AP. "EPA feels they got a handle on it." he said. "They think that the risk is real but certainly not as severe as some other places. Not to minimize it -- it's something to think about."

AP was not able to fully evaluate each site's readiness for the hurricane.

"If any site in the path of the storm is found to pose an immediate threat to nearby populations, EPA will immediately alert and work with state and local officials and inform the public -- and then take any appropriate steps to address the threat," EPA spokeswoman Liz Bowman said Friday.

"So far no sites have risen to this level that we are aware of."

A risk analysis by EPA concluded in 2012 that flooding at such sites in South Florida could pose a risk to public health by spreading contaminated soil and groundwater.

Flooding could disturb dangerous pollutants and wash it onto nearby property or contaminate groundwater, including personal wells, said Elizabeth "Betsy" Southerland, who retired last month as director of science and technology in EPA's Office of Water after 30 years at the agency.

"The agency needs to quickly respond with careful monitoring after the storm," said Southerland.

recent analysis for the Government Accountability Office by two researchers at American University found that a storm surge in South Florida of just 1 to 4 feet could inundate the half-dozen sites visited by AP in recent days.Irma was predicted to push in a wall of water up to 12 feet high.

Of particular concern was the one-acre Miami Drum Services site. It is located over a drinking-water aquifer in a heavily industrial area of Doral, in west Miami-Dade County.

The site was once home to more than 5,000 drums of various chemicals, some of which were dumped onsite after the metal containers were washed with a caustic cleaning solution.

That solution, mixed with the chemical residues in the drums, leaked into the Biscayne Aquifer, a drinking water source.

The EPA's community involvement coordinator for the site, Ronald Tolliver in Atlanta, told AP he was not sure what the agency was doing to prepare the site or contact residents whose drinking water could be affected by serious flooding from Irma.

Bowman said Tolliver was a new employee and may not have been familiar with the EPA's hurricane procedures for Superfund sites.

At the Homestead Air Reserve Base Superfund site south of Miami, it would take only about a foot of storm surge to swamp the nearly 2,000-acre Superfund site. Numerous apartments and a shopping center with a supermarket are nearby.

The EPA needs to do a better job helping people who live near Superfund sites stay informed with accurate information, said Stephen Sweeney, a former graduate fellow in EPA's office of policy and one of the American University researchers who conducted the Superfund flooding study.

"These residents need to be aware of their surroundings, and what could be in their water and the floodwater," said Sweeney, now a private consultant.

"There needs to be some sort of public communication. Either mass distribution of information or evacuating residents -- it's up to the agency to make that call."

At the Anodyne site in North Miami Beach on Friday, the AP found three sealed steel drums labeled as being filled with "IDW" soil and water in the open, weed-covered field behind a building.

IDW is the designation for "investigation derived waste." The drums were labeled, "Do not disturb." Bowman said the barrels were low-risk to human health.

A worker from a nearby building, who spoke on condition of anonymity for fear of retaliation, said he saw workers putting soil and water into the drums weeks earlier.

The EPA said soil and groundwater at the former industrial site was contaminated with a brew of toxic chemicals, including pesticides, solvents and heavy metals.

Bowman said the private contractor overseeing the site would remove the drums before Irma made landfall.

The EPA has made significant efforts over the last week to publicize its response to flooding at Superfund sites in Texas and allay concerns about similar sites in Florida.

That followed an Aug. 26 report by AP that at least seven Superfund sites in the Houston region had flooded during Hurricane Harvey.

AP journalists on the scene in Texas surveyed the sites by boat, vehicle and on foot. Hours after AP's story last week, the EPA said it had reviewed aerial imagery confirming that 13 of 41 Superfund sites in areas affected by Harvey had flooded and were experiencing possible damage due to the storm.

The EPA also confirmed that its own personnel had not yet visited the Houston-area sites.

Since then, EPA has been issuing daily updates about its efforts. On Monday, the agency organized a media tour of one of the Houston sites highlighted in AP's reporting, though AP was not notified about the press event and was not able to attend.

After AP informed the EPA in Washington that its reporters had been surveying Superfund sites in South Florida, the agency warned in a press release that "unauthorized entry at any Superfund site, either prior to or following the storm, is prohibited as these sites can be extremely dangerous and can pose significant threats to human health."

Following his appointment by Trump, EPA Administrator Scott Pruitt has repeatedly said that cleaning up Superfund sites is among his top policy priorities.

He appointed a task force to study the issue quickly, adopting 42 recommendations and saying he wanted to develop a "top-10 list" of the most dangerous sites.

Pruitt, who has questioned the severity of consequences from global warming, has been largely silent on the threat posed to Superfund sites by rising seas and more powerful storms.

A nationwide assessment conducted under the Obama administration in 2012 determined that more than 500 Superfund sites are located in flood zones.

Nearly 50 are in coastal areas that could also be vulnerable to sea level rise and storm surge, including several located in Florida. ------ Biesecker reported from Washington.