The Washington Wizards said Tuesday that two of their players are going on the NBA's health and safety protocols list and Orlando's game in Boston on Wednesday has been called off, the latest items in a wave of bad news related to the coronavirus pandemic for the league in recent days.

Those developments came as the NBA's board of governors was to meet and evaluate the situation around the league and determine what steps -- likely stiffening some parts of the protocols -- to take in an effort to keep the season going. The league has now postponed four games since Sunday because of the virus situation among some teams.

The Magic are also supposed to play the Celtics on Friday in Boston; no determination about that game has been announced.

The Celtics have eight players listed as out right now because of the league's protocols, and have now seen three of their games postponed this week alone.

"We're just going to follow what the NBA" says, Washington coach Scott Brooks said. "I mean, they're the experts. They have all the medical, they have all the science, they have everything, all the data. ... I'm for whatever the NBA wants us to do." 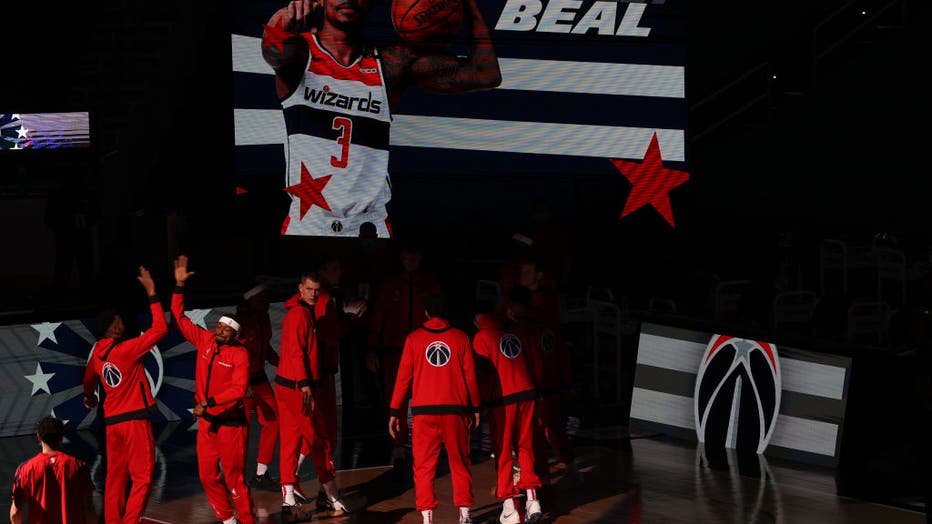 WASHINGTON, DC - JANUARY 11: Bradley Beal #3 of the Washington Wizards is introduced before playing against the Phoenix Suns at Capital One Arena on January 11, 2021 in Washington, DC. NOTE TO USER: User expressly acknowledges and agrees that, by dow

Among the actions that the NBA is working with the National Basketball Players Association to implement, according to two people familiar with the league's plan: urging players to stop in-game and postgame handshakes and hugs, additional mask-wearing rules especially in the bench areas, and mandates that would temporarily allow players in their home markets to only go to practices, games, workouts and tend to essential matters. The people spoke with The Associated Press on condition of anonymity because neither the league nor the union had announced those measures.

The Wizards canceled their Tuesday practice, saying that decision was made "out of an abundance of caution." They beat the Phoenix Suns on Monday night, and are scheduled to play host to the Utah Jazz on Wednesday night. The Wizards did not identify the two players.

Based on the most recent information released by teams, though the numbers can change quickly, it seems at least 36 players in the NBA entering Tuesday are dealing with some sort of virus-related issue. Those issues include players having to sit because contact-tracing data showed they may have been exposed to someone who may be positive for COVID-19.

"We're in a tough spot with COVID," Philadelphia coach Doc Rivers said after his depleted team lost in Atlanta on Monday night. "Not a lot we can do with it. I have a sneaking feeling that there's going to be a lot of teams with this problem."

Miami was preparing to play in Philadelphia on Tuesday without eight players because of virus-related issues and subsequent contact tracing, a problem for the Heat that presented itself after they played in Washington on Saturday night. Boston's game in Chicago on Tuesday was called off because of virus concerns, as was the Dallas-New Orleans game on Monday and the Heat-Celtics matchup in Boston on Sunday.

NBA Commissioner Adam Silver warned before the season that issues playing amid a pandemic would be "inevitable," but the league has also said in recent days that pausing play is not currently something under consideration.

The league said on Thursday that, for testing during the preceding seven days, four players out of 498 in the league had new positive tests. That figure is expected to be updated later this week.