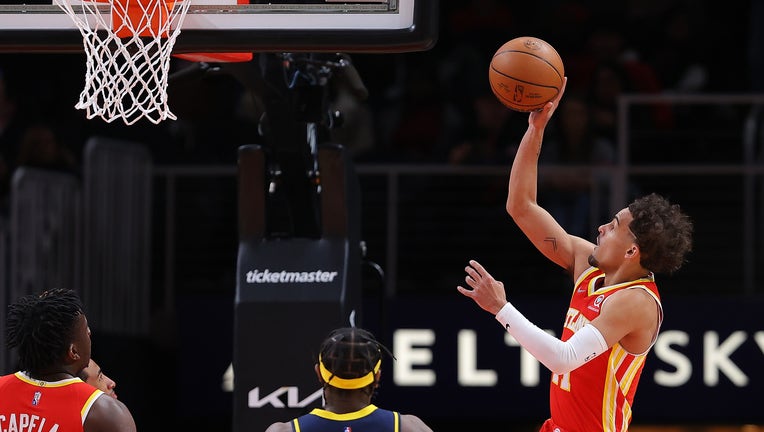 ATLANTA, GEORGIA - MARCH 13: Trae Young #11 of the Atlanta Hawks shoots a basket against Terry Taylor #32 of the Indiana Pacers during the first half at State Farm Arena on March 13, 2022 in Atlanta, Georgia. NOTE TO USER: User expressly acknowledges

ATLANTA - Trae Young scored 33 of his 47 points in the first half, and the Atlanta Hawks beat the Indiana Pacers 131-128 on Sunday night.

Atlanta, 10th in the Eastern Conference, had seven players score in double figures and shot 54.8% from the field. Danilo Gallinari and De’Andre Hunter had 15 points apiece, and Kevin Huerter finished with 14.

The Hawks have won 13 of 15 at home and two straight overall. They had a season-high 77 points in the first half.

Tyrese Halliburton and Buddy Hield each scored 25 points for Indiana, which has dropped four of five and 13 of 17. The Pacers, 13th in the East, fell to 8-27 on the road.

Young’s 33 first-half points were a career high for either half. He was coming off his NBA-leading 23rd game of at least 25 points and 10 assists in Friday’s win over the Los Angeles Clippers. That’s 10 more than James Harden, the next closest player. He finished with five assists.

The Hawks’ biggest lead of the first half was 19 in the closing seconds on Young’s two free throws. Atlanta shot 60% from the floor in the first half, 59.1% on 3s.

Young was 9 for 13 from the floor, including 7 for 9 on 3s, in the first two quarters. He did as he pleased most of the game, pulling up for long 3s, showing off his ballhandling ability and scoring with ease.

Indiana went on a 21-10 run to begin the third and pulled within seven at the 6:09 mark, but Young drove the lane for a runner and hit a layup on a fast break to make it 94-82 and cause the Pacers to call timeout.

The Pacers, down to eight players because of injuries, pulled within two on Duane Washington Jr.’s free throws with 1:09 remaining in the game. Young knocked down a pair of free throws with 28.8 seconds to go and two more with nine seconds left to help close it out.

Hawks: F John Collins, the team’s second-leading scorer and rebounder, was out with a right finger sprain and a right foot strain. Gallinari started in his spot and scored 11 points in the second quarter. ... Atlanta’s previous first-half high was 76 points, coming against Indiana on Feb. 8. ... Young reached 40 points for the seventh time this season.

Atlanta coach Nate McMillan has been impressed all season with Young’s ability to run the pick-and-roll and create scoring opportunities for his teammates. The Hawks rank seventh in scoring and Young is fifth in scoring and third in assists.

"I think we’ve seen pretty much everything teams have tried to do," McMillan said. "Trap, they deny, they try to play box-and-one. Normally he’s going to get the best defender and normally they’ve tried to (use) length. They switch one through five, so Trae has seen really all the defenses this year. Trae does a good job creating offense out of that set so we’re going to continue."