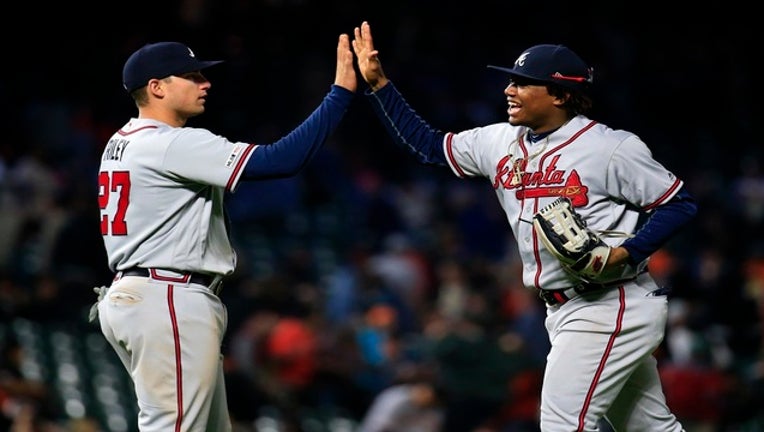 SAN FRANCISCO (AP) - Atlanta Braves left-hander Max Fried has received more run support this season than any other pitcher in the National League. Dansby Swanson and Freddie Freeman - with some help from San Francisco's defense - helped keep that trend going on a night when Fried wasn't his sharpest.

Swanson and Freeman hit back-to-back homers in the second inning, when Atlanta scored six unearned runs after San Francisco botched a double play, and the surging Braves beat the Giants 9-2 on Wednesday night.

"My off-speed stuff wasn't as sharp and I didn't throw strikes as much as I would have liked," Fried said. "But I was obviously picked up big time. The offense was incredible. It was just a good team win."

One day after closer Luke Jackson blew a two-run lead in the ninth inning of a 4-3 loss, the Braves jumped out to an early lead and coasted to their ninth victory in 12 games to pull within 1½ games of first-place Philadelphia in the NL East.

Swanson also provided a spark with two hits, including his eighth home run, a three-run drive to center field. Freeman, who singled in the first, followed with his team-leading 12th. Freeman has gone deep in five of the last seven games.

The two home runs came after Giants starter Jeff Samardzija (2-3) extended the inning with a pair of tosses that went awry. Samardzija made a throwing error after fielding Ozzie Albies' sharp comebacker with one out. San Francisco was in a defensive shift, but third baseman Evan Longoria appeared to stop short of the bag at second when Samardzija made the throw.

"Just a weird play," Samardzija said. "There are a lot of great things about these shifts but sometimes it does take guys out of the double play position. That's kind of what happened. It was just a freak thing."

Three batters later, Ronald Acuña Jr. struck out but reached on a wild pitch by Samardzija. Swanson and Freeman followed with the second set of back-to-back home runs for the Braves this season.

"That's what good teams do," Freeman said. "They have to capitalize on the mistakes and that's what we did tonight."

Braves manager Brian Snitker was pleased to see his team pounce on the mistakes.

"The extra outs in an inning are huge," Snitker said. "It always worries me when you score like that early because there's so much time to come back. That's why I credit Max. He went to work and he didn't let them back in the game."

Austin Riley also homered for the Braves, hitting a three-run homer off Derek Holland in the seventh.

Acuña helped out on defense with a pair of tough catches at the center field wall.

Buster Posey had an RBI single for San Francisco but was thrown out trying to reach second. Atlanta right fielder Nick Markakis made a barehanded grab after the ball caromed off the brick wall and made a strong throw to Swanson, who tagged Posey as he was sliding in.

Tyler Austin homered for the Giants.

Samardzija had seven strikeouts and gave up four hits and two walks in six innings.

"I know he gave up six but we gave them too many outs during that second inning," San Francisco manager Bruce Bochy said. "That was some of his best stuff, I thought."

Atlanta has hit six home runs in the first three games of the series. The Braves began Wednesday tied for sixth in the NL with 66. "It's a new trait in our club, all the home runs," Snitker said. "It's good."

Braves: 3B Josh Donaldson had the night off.

Giants: 1B Brandon Belt was rested before pinch hitting in the ninth. ... 2B Joe Panik got the night off.

Madison Bumgarner (3-4, 4.21 ERA) pitches Thursday for the Giants and has won seven consecutive decisions against the Braves. The big lefty last lost to Atlanta in 2012. RHP Kevin Gausman (2-3, 4.31) takes the mound for the Braves. Gausman has one win in his past eight starts.