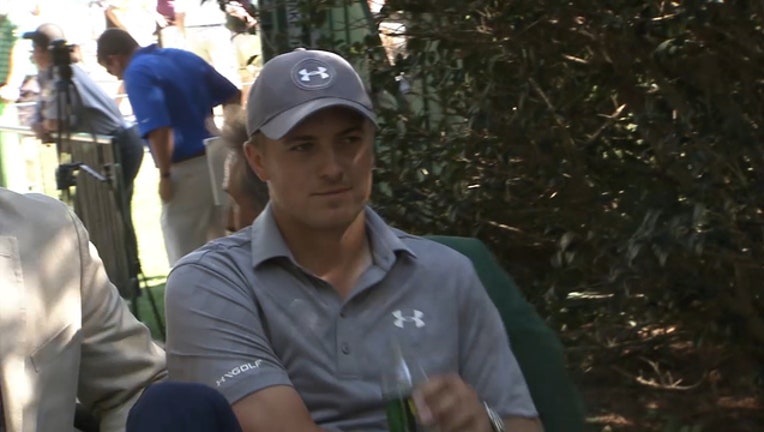 AUGUSTA, Ga. (AP) - Masters champion Jordan Spieth expected the nerves to hit long before he is announced on the first tee Thursday.

Spieth had to host the Champions Dinner on Tuesday night, a great honor for any golfer, but a bit daunting for a 22-year-old in a room that included greats like Arnold Palmer and Jack Nicklaus, Gary Player and Ben Crenshaw.

"I imagine the chairman will maybe ask me to say a few words," Spieth said before the dinner. "I'll certainly think of something that makes sense, given the time. But I'll probably do less talking and more listening tonight. There will be nothing that I've ever done before or will ever do that will match the first time talking to that audience. It's a bit odd to think about."

Only Masters champions are invited. Spieth's caddie, Michael Greller, found that out the hard way from Spieth's agent, Jay Danzi.

"At first I think he thought he was going to be able to be there," Spieth said. "He was a bit surprised when ... I think it was Jay who told him, 'No, Michael, nobody goes.' He was like, 'This is going to be the coolest dinner ever.'"

THE MAJOR MAGIC NUMBER: Johnny Miller was the first player to shoot 63 in a major, in the final round at Oakmont in the 1973 U.S. Open. Since then, there have been 26 other rounds of 63 in the majors, with half of them at the PGA Championship.

But there have been only two at the Masters.

Rory McIlroy has a couple of ideas why there are so few at Augusta.

"You can hit great shots here and leave yourself 5 feet and just be trying to two-putt," McIlroy said. "So I think that's why it doesn't surprise me so much."

McIlroy got his 63 during a calm day at St. Andrews. There have been eight rounds of 63 in the British Open, mainly links courses often have flat greens, and a calm day allows for low scoring. The greens at Augusta National are among the most undulating in golf.

"I think that's one of the reasons why it's so difficult to go really low here," he said.

Mickelson said he feels much younger.

"I was looking at some of the highlights 10 years ago when I played and I just thought, 'Gosh, I wish I had known then what I know now about nutrition and about all aspects.' I think I could have saved myself from grief in the last 10 years. But now I feel like I'm in some of the best shape I've been in. I'm driving the ball better than I have in well over a decade, and my game is ... I'm so excited to play golf."

And with that, Mickelson offered a message to youth that had more to do with mechanics than five-course meals. He believes golfers can last longer if they swing the club like Bobby Jones instead of what he referred to as a "violent movement."

"A lot of the young guys continue to get hurt as they create this violent, connected movement, and I don't believe that that's the proper way to swing the golf club," Mickelson said. "And the better I play and the more successful I am at an older age, that message will get through and hopefully kids will start to play golf and swing the club with less of a violent body movement and be able to play golf for a lifetime."

SCOTT AND STEVIE: Adam Scott won twice in Florida with David Clark as his caddie, and there was speculation he might bring him to the Masters. Scott uses two caddies — Clark and Steve Williams, and Williams is working this week. That was the plan, and Scott wasn't about to change.

"I didn't have any conversations with David," he said.

Williams was on the bag for 13 of Tiger Woods' majors, and he helped Scott read the 10-foot putt in a playoff when the Australian won the 2013 Masters.

"I don't know if any caddie has won as much as he has around here," Scott said. "So he has an affinity with the golf course from his side of things, and our results in the major championships since Steve started working for me in 2011 have been fantastic for me."

FINAL WORD: Phil Mickelson, when asked if it felt strange to be at majors without Tiger Woods: "Well, it's not like we shared a house together, so I don't notice it that way."