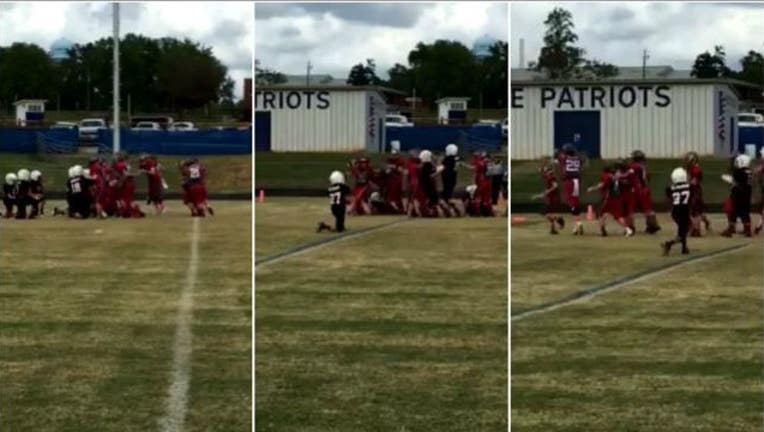 BARROW COUNTY, Ga. - A touching moment was caught on camera during a middle school football game in Barrow County over the weekend.

On Saturday, October 7, the seventh grade Madison County team took on Winder-Barrow, and during the game, a player with cerebral palsy scored a touchdown.

Reese Braswell was born 8 weeks premature and spent the first three weeks of his life in the neonatal intensive care unit.

"We knew he would struggle to hit the same milestones as other children at the same ages, and eventually he was diagnosed with cerebral palsy," mother Allison Braswell told FOX 5. "Reese has come a long way and has had to learn to walk twice."

Over the years, Reese has undergone 13 surgical procedures in several different surgeries.

"Reese has always wanted to play football and has recently been released by Dr. Westberry to play sports. When he was little he begged," Braswell said.

Reese's mom said he practiced day and night and figured out how the game works.

"His legs don't work like everyone else's do, but that has never stopped him. From the time he was little, we told him he could do any physical thing he set his mind to, his legs just might have to do it differently."

"The love those boys show out there is something to be seen," Braswell said.

"This is his first year playing and obviously he isn't able to play very much in the games, so the other boys on the team decided they wanted to design a play that would allow him to get a touchdown," Ramsey said. "They decided that if they had the chance and could get down there, they would run out of bounds at the one-yard line and then let Reese run it in."

In the video, all the boys surrounded Reese and pushed him on through to score the final touchdown of the game. As the opposing team realized what was happening, they all took a knee.

"This was a completely selfless act by twenty-two 12-year-olds," Ramsey said. "The majority of the Madison County team has been together since they were five, so they've grown up together and have turned into some pretty awesome young men."

"With the conclusion of the play, the entire stadium came together as one team and cheered #54, Reese, on.  Every boy on that field, no matter his uniform was just as much on top of the world as Reese," Braswell said. "It was a tough ballgame and they were loosing, but in that moment, nothing else in the world mattered."