The PGA Tour has outlined a health plan for its return that includes players testing for the new coronavirus both at home and when they arrive at tournaments. Officials discussed the health and safety plan on Wednesday. 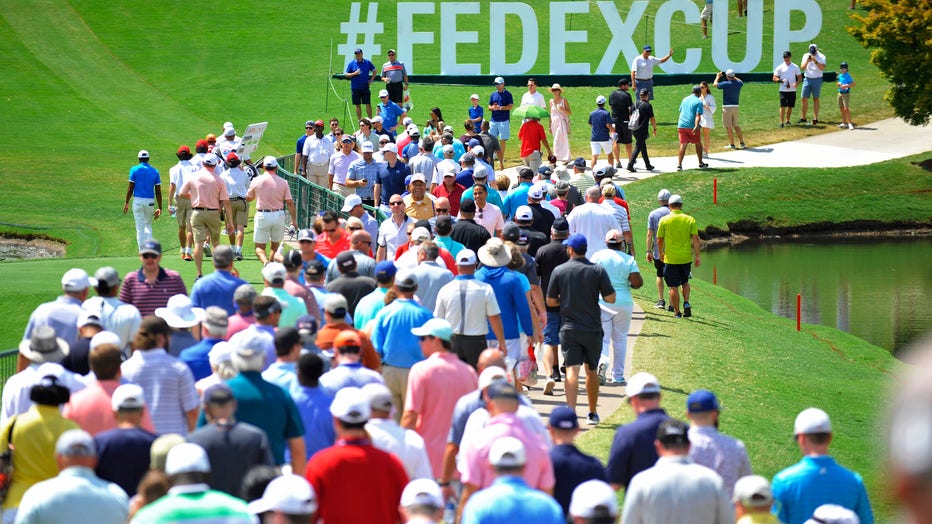 ATLANTA, GA - AUGUST 23: Fans walk down a sidewalk alongside the ninth fairway during round two of the PGA Tour Championship at East Lake Golf Club. (Photo by Austin McAfee)

Players, caddies and key personnel will be tested once a week at tournaments and have their temperatures taken every day as part of a PGA Tour plan to limit the risk of the new coronavirus when golf resumes next month in Texas.

The plan offers a glimpse into significant changes for golf's return, from the elimination of pro-ams to designated hotels to the availability of charter planes that get players and their caddies from one tournament to the next.

The first trial is scheduled for the Charles Schwab Challenge at Colonial in Fort Worth on June 11-14.

The key components are testing, social distancing on and off the golf course and creating what the tour referred to as a "bubble" of essential people that will be tested at tournaments.

"We're not going to play if we can't do it in a safe and healthy environmental for all our constituents," said Tyler Dennis, the tour's chief of operations.

He also said the tour will not go forward with its testing if it takes away from resources in the city where it plays.

Players and caddies will be sent pre-travel tests, and they will be given the RT-PCR test for COVID-19 when they arrive at tournaments. The test, authorized last month by the Food and Drug Administration, involves a nasal swab. Results typically take a couple of days, and the tour is hopeful of using local labs for a quicker turnaround.

Anyone who tests positive will have to withdraw from the tournament and self-isolate for 10 days, provided there are no further symptoms and they get two negative tests 24 hours apart.

The tour said it would give players and caddies a stipend to pay for the self-isolation. Andy Levinson, the senior vice president for tournament administration, said the tour would pay for all testing material.

Beyond testing, the tour is recommending players stay in a designated hotel and practice social distancing as if they were still at home by avoiding eating at restaurants or meeting at bars.

On the golf course, players are to handle their own clubs and let their caddies rake bunkers and remove the pins, wiping down both after they're done with them.

Another change: No shaking hands after the round.

Along with no fans for at least the first four tournaments, the tour is not allowing family members and only limited support staff, such as trainers and instructors. All would be subject to the same level of testing -- a health questionnaire and thermal screening every day.

For the charter flights, all passengers must take a viral test 24 hours before leaving, and then be tested again when they arrive at the next event.

The tour said about 25 players remain overseas and recommended they arrive at least two weeks ahead of the tournament to meet the federal 14-day quarantine requirement.

A player hotel will be designated, although players would be allowed to stay in RVs if they have them, rental homes the tour approves and their own homes if they live in the area.

Four tournaments without fans will be Colonial, the RBC Heritage at Hilton Head, the Travelers Championship in Connecticut and the Rocket Mortgage Classic in Detroit. The tour said it will decide after that whether it's safe for a limited number of fans.