JACKSONVILLE, Fla. - For the better part of the last decade, the road to an SEC Championship has gone through Jacksonville.

In the last 11 seasons, Florida or Georgia represented the SEC East in the conference’s championship game eight times.

So it is again in the 2019 meeting between the two rivals, the second straight year the neutral-site game will be a top-10 matchup.

One of the South's biggest rivalries meet in Jacksonville on Saturday

“It’ll be a great challenge,” said Georgia head coach Kirby Smart. “It always is when you play these guys.”

Both teams have one conference loss on the season, so the stakes are high for both teams’ hopes.

“This is like a playoff game for us. We’re playing for pretty much everything we want in our season in one game, so we’ve got to approach it like that,” Georgia running back D’Andre Swift said. “I think our approach needs to be different. We need to be more focused, we need to be more locked in. We’ve got everything in front of us.”

“Every game’s got to be a playoff game from here on out,” said safety J.R. Reed. “We know that whoever wins this game is going to win the East, and that puts you in the hot seat to drive the destiny wherever you want to go.”

“We always feel like we got something to prove. We just want to make a statement to the country – not only to the country, everybody in the world – that we’re a good football team no matter what we do,” Kindley said. “We can run, we can throw the ball, the defense going to tackle, cause havoc.”

In their last 13 meetings, the team with the most rushing yards won the game, with the Dawgs outgaining the Gators 189 yards to 170 last season. But this year, Smart said Florida’s prolific receivers make it “a complete offensive package” for Florida head coach Dan Mullen.

Five Florida receivers have more than 20 catches on the season, and the receiving corps averages nearly 12 yards per catch. Smart said his No. 8 Bulldogs are up for the challenge.

“Dan does a great job, No. 1, developing quarterbacks,” Smart said. “They’ve become really explosive. They’ve got as deep a group of wide receivers as we’ve seen from top to bottom.”

“There’s just so many of them,” Reed said. “They have so many weapons out there, you just never know who’s going to get the ball, and we have to play really good in the back end.”

On defense, the No. 6 Gators are tied for ninth in college football with 29 sacks, and their top two pass rushers, Sprayberry product Jabari Zuniga and Hiram product Jonathan Greenard, are expected to return to full force on Saturday from ankle injuries.

“Those guys get after the passer as good as anybody in the country. It’s obvious with their statistics,” said Smart.

“They’re as good as everybody say they is. We know this, so we know what we need to work at,” said Bulldogs left guard Solomon Kindley. “You win games on the front, offensive line, defensive line. You control those two things, that’s how you can win.” 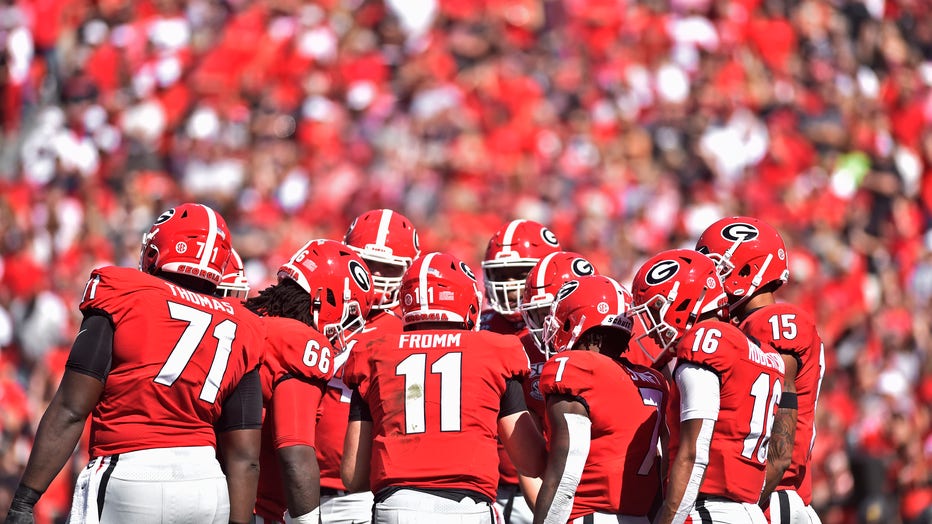 In October, the City of Jacksonville announced a new agreement to keep the Georgia-Florida game at TIAA Bank Field through at least 2023, with an additional two-year option that could keep the game in Jacksonville through 2025.

Smart has said it presents a recruiting challenge since it is a neutral-site game and neither team gets to host high school prospects on campus. On top of that, the home team in Jacksonville loses a true home game to host recruits.

Everybody is friends today in RV City outside of TIAA Bank Field in Jacksonville. Not tomorrow, when No. 8 Georgia and No. 6 Florida meet on the field.

“That was one of my best memories as a player to (play at the neutral-site game),” Smart said Monday. “I’m 100 percent on board with it. I’m a team player. I said once the decision was made, it’s made and it’s a two-year commitment.”

The players say they enjoy the unique neutral-site atmosphere.

“It’s amazing,” Dawgs running back D’Andre Swift said. “It’s one of the best (rivalries) we have. The atmosphere, the half and half with the fans in the red and the blue, when you walk out there for pregame warmups, it’s just like ‘Wow. It’s crazy.’”